Another travelling day today. The train was supposed to leave at 6:30am but we were waiting on the platform until 9:45am, which was very boring! It was a long trip, but the train wasn’t too crowded and we had upper berths to stretch out in. The train wasn’t going to stop at Sanchi (in classic form, 3 people from the railway said it did, and the last ticket inspector was sure it didn’t), so we got an extension to our ticket to go onto Videsha (10km from Sanchi), where we arrived about 8 pm. We caught an auto-rickshaw to Sanchi from there.

Very crappy dinner at the ‘Traveller’s Lodge’ (oh, what I’d give for a decent meal) and no rooms there, but luckily the manager got us a room at the nearby ‘Traveller’s Cafeteria’ (these are both state tourism places). Walked there, filled out the usual forms, and went to bed.

If only my health would improve. It’s cold and misty around here and I’m really run down, so I don’t see too much hope! We had a truly crappy breakfast (scrambled tasteless eggs on mushy toast and bad coffee), left our bags chained up by the reception desk, and walked to the nearby site of the stupas. Sanchi really is a one-horse town – just a crossroads with a station at one end and the Sanchi site at another.

The Great Stupa really was amazing however and I felt I’d really fulfilled another dream after circumabulating it clockwise! Way back when I was in high school, I’d studied this monument in Art History class and vowed I would walk around it one day. The four toranas (gates) are beautifully carved with intricate scenes of the Buddha’s life. It was a bit misty so couldn’t enjoy the view from the hilltop, and I was feeling pretty bad; but it was still exciting to be there. We wandered around the site (a couple of smaller stupas, ruins of temples and monasteries) for a while, but there was still plenty of time to kill before the train. Nowhere else to eat so after another crappy meal at the Traveller’s Lodge and a tea at the Cafeteria, we picked up our bags; I’m now writing from the almost deserted Sanchi train platform, waiting for our (1½ hours late) train to Jhansi.

I finally picked up the (dubious) skill of hoiking out mucus, and it’s a noisy business but it keeps me a bit more cleared out. Continual blocked nose and sinuses though. FED UP with being sick!

Eventually the train arrived and we piled into a 2nd class carriage and got our bags up on a rack; some friendly people moved aside to let us squeeze onto seats. K squeezed in between two Indian village women, one old and one young; they didn’t speak English (or read or write we later discovered) but were friendly. An older man beside me spoke a bit of English, but he got off at Vinesha.

The trip to Jhansi was very much what I had imagined Indian train travel to be like before I came here. K was stared at a lot by various men of course, and at one stage in the middle of a stare triangle, she eventually drew her shawl over herself and retreated under it. One woman had a sick or very restless child; we gave her some water. Later on I had quite a long talk with a man, probably in his mid-30s, which was interesting. He had a sort of sleazy air about him but seemed genuine after a while; he got lots of information out of me about my family and was pretty amazed and amused by my parents’ lives of divorce and remarriage. Although I said there was no caste in Australia, he enquired in detail about my brother’s profession until I said “you’re trying to work out my caste aren’t you” and he laughed. It was hard to explain some things as his English was limited. He bought me a chai before we got off and was very complimentary about the ‘equality’ in Australia, though I suspect he thought the Indian system far more workable in practice!

It was a horrific bull rush at the station, and the touts swarmed us almost as badly as they had at Shimla. We were both absolutely exhausted and K snapped a bit and shouted at one, waving her drink bottle at him; eventually we got on an auto-rickshaw, beat off the last-minute ‘passenger’ who always tries to take you somewhere else, and got our ride to the Sita Hotel. As a last treat the driver tried to turn the 10 Rs fare into 10 Rs each — with no luck, needless to say.

To our great relief the Hotel Sita was very modern with a TV and room service so we ordered a beer and Chinese food and watched a bad film. Heaven. 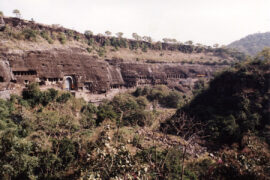 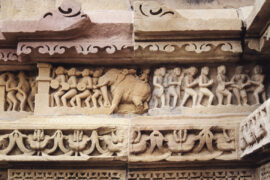