Things start to get a bit blurry here, partly because I’m writing from the 22nd, and partly because I caught K’s flu and it wiped me out too. Only now do I feel slightly on the mend. We’ve both been pretty miserable, with very low tolerance levels (and energy levels) and not much to feel happy about. I, as usual, have less patience and get angry and frustrated at being sick. I really am a terrible patient!

Anyway, on the morning of the 18th I woke with that horribly familiar acid-throat feeling – though throughout the day I was sure I was just having a mild relapse and would get over it in a day. No such luck! K had a bit more energy so we had breakfast at a place called 8th of July, then we went for a short walk down to a bookstore in the market, where I bought two books: An Indian Summer and No Full Stops for India. At this point I was getting tired and grumpy so we took an auto-rickshaw to the lake/old reservoir, which was quite peaceful, surrounded by old ruined temple facades, and both read for a while.

I can’t even remember what happened in the afternoon – we had lunch at the Natraj again. Apparently I slept while K went for a long-overdue wander.

Friday was another ‘day that wasn’t’. I spent it all in bed in the haveli room, feeling sick and fed up. K wasn’t too much better either. 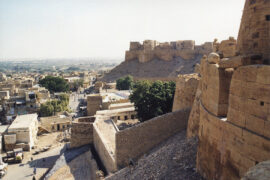 Jaisalmer: A New Hotel and a Jain Temple
Jaisalmer to Udaipur 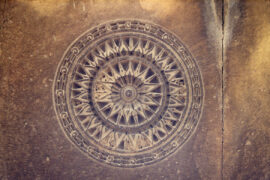