After a delicious breakfast of thick banana pancakes at the Tibet Hotel restaurant, we started on a two hour walk. It was an absolutely beautiful morning; the air was crisp, the sky blue, and I was feeling in a particularly good mood. We took one of the ‘roads’ from the bus station up the hill to the small village of Dharamkot, where a primary school was starting its day and the kids recited verses (prayer I assume, but maybe there was a school song in there too). An American guy who’s been here since May gave us further directions.

From there was a beautiful walk through a picturesque, neat little collection of houses among terraced fields, which led to a small river, then down to the village of Bhogsu. On the walk from there back to the town there was a spectacular view down into the valley. My favourite walk so far.

Unfortunately, afterwards we had a bad experience with an ISD/STD office, where the guy told us it was 38 Rs a minute then tried to charge us 78. We ended up slapping down a fair amount and storming out. The beggars were out in force today as well and we seemed to be accosted at every turn – and with a couple of exceptions the beggars look pretty happy and well fed in this town, but there was one old woman with no fingers we gave 20 Rs to.

After a recharging coffee, we walked down a path off the bus station, past a large group of monkeys (monkeys at close proximity are quite scary – I had one screech and bare its fangs at me this morning when we passed the garbage bin it was grazing through), and down to the Dip Tse-Chok Ling Gompa, a small monastery on the hill. A monk opened the prayer hall for us which was beautifully decorated (and smelt great!).

We then walked back up to near the Dalai Lama’s temple, checked on our tickets to Jaipur, and strolled around the stalls. It started to rain a bit so we relaxed in the hotel room for a while.

Had a couple of beers in the Tibet Hotel bar and read the paper, and dinner at the Ashoka restaurant – great food. Back at the hotel about 8pm.

Hoping to go on a day trip to Kangra tomorrow, as we’ve done the small walks around McLeod Ganj and are ready for a change of scenery.

When we were having a beer we noticed a stupid old American woman done up in Buddhist robes giving some kind of Tarot reading that sounded like a mish-mash of New Age, Buddhist phrase quoting and American self-help manual. The barman was laughing his head off when she finally left. She crapped on and on for ages – embarrassing old cow! 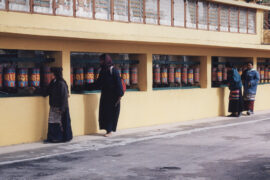 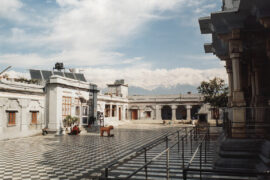