We had the morning and early afternoon to kill in McLeod Ganj – we’d organised to meet Claire and William at the ‘bus station’ (ie, the small square of mud at one end of town), at 3:30pm. We didn’t do much – had breakfast, and later a long lunch on the roof at the Tsongka; packed, paid our bill, and took another stroll around the prayer path below the Dalai Lama’s temple.

Eventually we whiled the time away and met Claire and William. I’d been hoping these would be nice people and luckily they turned out to be wonderful. She’s French and he is English, and they live in a small village south of Paris. Perfect travelling companions, and already in the taxi trip to Pathakot we were swapping stories and having a good laugh. They live here four months of the year, and once lived here for a year in a small village in the south of India.

The train to Jaipur, through Delhi, left from a small station near Pathankot called Chukkibank, so we decided to stop in Pathankot for dinner. Asking the taxi driver to drop us at a place to eat, we got dumped at a terrible pseudo-50s-fast-food joint. Despite a search for something better by William, new had no luck – Pathankot definitely seems a bit of a one-horse town!

The ‘lads’ were out, so we got swarmed by a group of Indian guys in their early 20s – a whole bunch of them besieged me with questions and forced me to join them for a while! Finally they left (one guy sat with us for 10 minutes, sometimes just in embarrassed silence), and we ate a quick meal of rice and noodles. Had a good conversation about Hinduism and Tibetan Buddhism. I was interested to learn that Tibetan Buddhism is quite close to the original principles and the monks are incredibly intellectual – apparently they have rapid-fire discourses in logic, each point punctuated by a set of ritualistic hand motions. Fascinating.

After a nightmare taxi ride through the night to Chukkibank, the real fun began. The station was packed, and a train full of soldiers was ready to leave. Looking at the passenger list on the noticeboard, we discovered that there was a ‘WL’ – waiting list – next to our names despite Mr Guptar at Ways Travel telling us we would have reserved seats “no problem”. We most definitely did have a problem . When William told the station master (a complete ulcer of a man in Welsh beret and skivvy) we were going to Jaipur he slammed on a button and broadcast for the train full of soldiers to stop. Oh good – we walked perfectly into some kind of long-running power struggle between the station master on one hand, trying to keep control of his little kingdom of influence, and a trainload of soldiers who’d all but taken over a passenger train for their journey to Delhi. According to William this was situation was a well-entrenched feud.

The station master was trying to get us on the soldier-filled train to Delhi, there to change from New Delhi station to Old Delhi station to get a train to Jaipur. Before we realised all this Claire had almost rushed us on to the train, but (luckily) the soldiers wouldn’t have us on – it was then we realised the train was full of them. After that there was no way we were getting on that train, despite the station master insisting that we did, and that we would not be allowed on the 8:35 to Jaipur because it was full. But he wouldn’t let the train go, so the soldiers got off and filed into his office to argue furiously while we sat outside in a dark corner and tried to look as small as possible. I started to feel a bit worried as a group of these guys, one a large, fat Sikh man with a greasy handlebar moustache, red turban and huge belly held back with a wide black belt, walked past, casting what I interpreted as lewd looks over the girls. Like the situation near the pyramids six years ago, I found myself wondering what I could do if things got desperate – if for some reason, or to pass the blame, the station master blamed the delay on “those stupid tourists” outside, and the soldiers got ugly. Luckily I never had to find out.

Another train was announced and everyone on the platform filed over the station bridge, and in some cases through the first train and over the tracks, to the opposite platform. Still very worried, we followed the crowds and two other foreign guys, who seemed to be making an effort to distance themselves from us. Another station official sidled up and tried to sell us tickets to Delhi, which we refused.

Eventually the train – our original 8:35 train to Jaipur – arrived, and there was a rush for the doors. The class on our ticket (2nd class sleeper) was full and the doors were locked, so we had to pile into 2nd class air-conditioned, and found a couple of seats to claim and do our best to look confused.

We made it to Ludhiana – 3+ hours – before our luck ran out. Several discussions with passengers and the ticket collector man – who squeezed up the narrow passageway with a gaggle of followers behind him, exactly like the executive in a scene from the movie Brazil – got us nowhere nearer to getting into the 2nd class sleeper compartment. That was another carriage, and someone else’s domain, and despite the fact that it was locked we should have been in it. It was Indian bureaucracy and petty officialdom at its nightmare worst.

At Ludhiana there was a new ticket inspector however and no compromises were possible – it was stand in the entrance space of the carriage or get thrown off the train. So at about midnight the four of us, with our packs, were forced into a tiny space between the entrance doors and the door to the compartment proper, right next to – crammed up against even – the two unbelievably smelly toilets, ‘Indian style’ and ‘Western style’, with about five other men and one woman, including several soldiers with guns.

Welcome to the place you’ll spend the next seven or so hours. They beggar description. I found myself comparing and contrasting the smells that came out of the toilet compartment every time a passenger came out of it. Luckily a man discovered the rough seat that came out of the wall – eventually – which allowed three people a tiny measure of comfort, but there really was no place in that tiny dead cat space in which to relax. Propped up against our pile of rucksacks at the very end of the toilet corridor was about the most comfortable, but that’s where the smell was the worst. Occasionally a passenger would come out to smoke a cigarette in the windowless space and make things more horrible.

At one stage the soldier opened the back shutter that our packs leant against to the space between the trains, and to my shock, even there, in the noisy, cold maelstrom of a spot, was a protesting figure wrapped in a blanket. He shut it again.

The hours crawled slowly by and the train seemed to move even slower. There were interminable stops at nameless stations, a sudden outbreak of argument between two of the men, snippets of restless dozing, brief conversation, endless rearrangement of limbs in search of some comfort. Eventually we arrived at a core of seven people – a bearded man in the corner of the seat, the four of us (usually two sitting, one standing, one propped against the backpacks), a middle aged man sitting on a pile of parcels, and a young man sitting on his suitcase.

Eventually, finally, we made it to Delhi about 7am. We got off and made a desperate attempt to get into the right compartment. People piled off through a knot of passengers ready to pile on, and when a break came we shouldered into the compartment and found berths – four blissfully free spaces up above the carriage floor. Thankfully most of the train seemed to get off at Delhi, and the hours until we arrived in Jaipur about 2pm were spent in sleep and wonderful comparative comfort.

There was a huge divide between the ‘modernity’ of the second class A/C compartment and this second class ‘sleeper’. It was fascinating to watch the people on the train from up in one of the berths – the noisy, snotty snoring of the man asleep, the meticulous turban-donning of the Sikh man, the static-filled Hindi music blaring on a cheap cassette player.

At last, we made it to Jaipur, after almost 24 hours of journeying from place to place.

We said goodbye to Claire and William at the station, exchanging addresses, and walked until we found the Magniwas Hotel, which is absolute paradise at 800 Rs a night and the best hotel we’ve found so far. An absolute oasis – clean, well-run, a good restaurant,  a place obviously run with an iron hand by a friendly and solicitous Indian lady. There’s even a sparkling clean pool!

Soft, comfortable beds, and the most welcome sleep I think we’ve ever had.It’s a shame I didn’t take any photos of this whole experience, but there was never a time I felt safe getting my camera out of my bag. 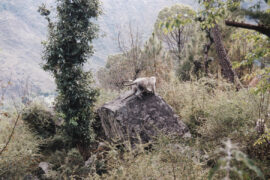 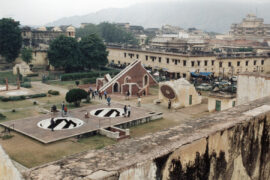