In keeping with all things Indian, a low was followed by a high and we had a really good day in Pushkar today. We had a hearty breakfast at the Sunset Cafe (lots of potato involved), taking our time getting started, and then went to a couple of shops that seemed to stock the best quality stuff in town. At the first I bought a really nice soft cotton scarf and a black shirt, and at the second a green shirt and some pants. Also got some wooden fabric pattern stamps – a big one for me and a few small animal ones as gifts. K got some pants and a skirt and some tops. We also bought a tablecloth. This little spending spree put us back the grand amount of about $72. Ha! The guy in the second shop, Rattan, was a nice young bloke and we spent about an hour in the shop, K trying on stuff while we chatted and drank tea. He lives in a village 5km from town and bicycles to work, and had never been out of Pushkar.

After dumping all these purchases at the hotel, we had a very poor thali each at a cafe – rushing our food so we could meet Claire and William at the appointed time of 3pm. Their little guest house room was very cute and they looked quite set up, their clothes hanging on hooks all around the room. Claire was tired and opted out of our excursion, but William came with us to walk out of town and up a nearby large hill crowned by a temple. The temple was nothing amazing but the view over Pushkar and the surrounding countryside was spectacular. Steps had been built all the way to the top, which must have taken an incredible amount of effort.

William had to leave us to attend a puja (Hindu blessing) ceremony with Claire on the lake, but we stayed for a while to soak up the view. As the sun started to descend so did we, back to the town. On the way back through the streets we stopped at a massage place C&W had recommended, and K submitted herself to an incredibly vigorous head and shoulder massage by a crazy jabbering Indian man. She was laughing her head off by the end of it!

After a good hot shower and a change of clothes, we walked next door to the Om Guest House Restaurant to meet C&W for dinner. There was hardly anyone there, and instead of the ubiquitous buffet we were treated to a delicious vegetable palau with banana, cashew nuts and coconut. Good company, too. We said our goodbyes outside, hoping we bump into each other in Khujaraho. 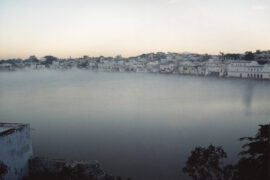 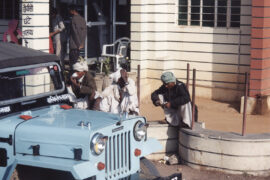