An early start (unnecessarily early, it turned out) – up at 5am for our 6am bus. Recorded chanting flowed out of the temples as we passed them. We were waiting for a bus, but somewhere along the line this became a jeep, and we were sandwiched into the back with six other travellers and their luggage. A bumpy ride in darkness back to Ajmor.

The confusion had only just begun… we waited with a group of similarly confused and frustrated foreign victims for our bus, which eventually arrived at about 7:45am. Oh well. Apparently the bus never showed up at all yesterday. There followed the usual mad scramble to deposit luggage in the back and get a seat, an operation only made possible because there were two of us. The fact that we had seats 17 and 18 on our ticket was, as usual, meaningless – not even worth mentioning – we got seats at the back of the bus and there were people sitting in the aisle.

It was about five hours to Jodhpur, with one stop along the way. Not too bad a trip, though it was very bumpy sitting at the back of the bus (tip for Indian travel: don’t sit at the back of the bus) and the driver didn’t slow down for much of anything. At Jodhpur we elbowed our way through the usual touts and got an auto rickshaw to the Durag Niwas Guest House, which has proved to be pretty cosy. It’s run by a family, and there’s a nice bloke called Sukha who greeted us with “this is not a hotel, this is your home.”

We had lunch in the interior courtyard, then a nap, as we were both exhausted and K has developed a bad cough that has settled on her chest. So we had dinner in our room although there was a ‘dance program’ in the courtyard with dinner which we checked out. A small band played Rajasthani tunes while two beautifully dressed girls twirled around a fire. Very colourful, and they looked like they were having fun.

Dinner was quite good too. Our room is the biggest we’ve had so far, and has two sitting areas, one on a mat on the floor and one with chairs around a table. It’s very comfortable sitting on the floor, eating from a low table; something I’d like to set up at home. 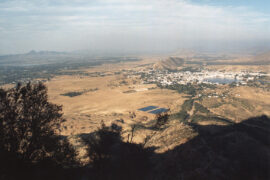 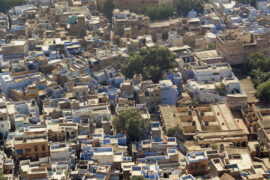