At last, some improvement in our health. We were both feeling better this morning; especially K of course – we even had breakfast together downstairs! This morning our first priority was to change some more money. We were both going to make this trip but K felt exhaustion hit her again and went back to bed.

I got an auto-rickshaw out to the more ‘modern’ area of town to the State Bank of Bikanar & Jaipur, which as Indian banks go was relatively organised and efficient – the teller even smiled when he gave me my money! Changed US$400, then decided to start walking back to the lake as I was feeling quite well. Had a really pleasant long walk; stopping on the way to buy cheap backgammon and chess sets and a tape of that terrible Pil to Paquos Hei film music we can’t escape from to give to K.

Strolling along I started chatting to a young guy called Mokesh who seemed to be lacking the usual bullshit routine; unfortunately however when I accompanied him to check out his ‘art school’ it was another chance for him to dump another dumb tourist in for the miniature painting hard sell routine. This was very disappointing. Another guy went through his spiel even though I made it plain I wasn’t buying anything – by the end he was down to trying to get rid of some 5 Rs cards! It’s hard not to turn into a cynical tourist but any conversation you strike up always ends in a con job.

Eventually I found myself near the Shivniwah Palace so I booked a table for two for dinner tonight (Rs 200 advance), after checking that there would be no hokey western Xmas festivities as part of the meal, and then headed back to the hotel, on the way buying K an Xmas present of a small silver (?) pill box.

K was feeling much better, so we went to a rooftop cafe for lunch (which was crap), and then went to the Palace complex to look at the museum there. It was amazing to actually be outside together again and we were both much happier, wandering through the pretty crappy palace apartments, ubiquitous arms and armour collection, bad paintings etc. Then we went down to the Lake Pichola shore and got on a tourist boat for a one hour trip on the lake. The shore looked fantastic from the lake, with the huge palace (divided into the museums and several hotels) dominating the view. The boat went along the shore, past the Lake Palace and to Jagmandir Island with its small palace, where we dropped off to wander for a bit. Huge forecourt on the water, stone elephants on the lake edge; a compact and lovely place.

Back on the mainland we had a beer (!) at a hotel cafe on the shore and then went back to the hotel to get ready for our big night out!

At last some good luck; we were both well enough for our special Christmas dinner, and even walked all the way to the Shivniwas. I bought a pillbox hat on the way.

Dinner was held around the hotel pool; a sitar and a tabla player played softly, the pool was lit up and lights strung around the courtyard, uniformed waiters attended and the food was excellent, even if it was another buffet.  K ate turkey and ‘mild’ food, while I enjoyed the Indian food. I gave K the music tape (it turns out she was going to give it to me for my birthday!), and later the silver box.

It was a bit cold but not too bad, and even, contrary to promises, the briefest appearance of a ho-ho-hoing Indian Santa Claus complete with bell didn’t spoil the ambience too much!

All up the evening cost 3000 Rs (incl tip), and we were surprised that as we were leaving the waiter rushed after us to remind me that I’d forgotten to figure in the 200 Rs I had already paid–we told him to keep it with a “Merry Christmas”.  Unheard-of honesty!

Auto-rickshaw back to the hotel. Stood on the hotel roof for a little while and looked at the bright lights of the Lake Palace illuminating the water; a lone firework went into the sky (but didn’t burst), and loud Indian dance music played from somewhere. 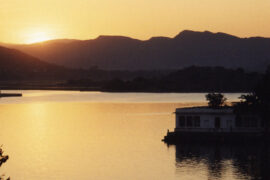 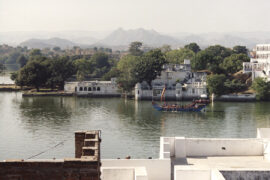