Sitting at a desk in a small, cheap room in Chinatown, San Francisco, TV and conversations flowing through the lightwell outside the window, hum of an air conditioner somewhere, it’s seven at night. I’m starting another travel diary, beginning another trip, seeing some new places again. My feet are sore – they’re not used to walking city streets for hours. They’ll toughen up soon enough. I’ve got my bearings already and I like this city – it’s big but easy to get around in, and not too alien as a first destination.

After a week or so at my father’s place in San Clemente, California I flew up to San Francisco and after a night in that hotel in Chinatown, holed up in a sleazy hotel room in the roughest part of town (the wonderfully named Tenderloin, near the also wonderfully named expensive Nob Hill) for a week and a half. It was an atmospheric hotel to say the least … one evening I passed a young Asian transvestite in the corridor who stopped me with: “Hi, where’ya going?“

I doubt if I’ve ever received such an unappealing offer. My next door neighbour argued until 3am (I suspect with himself as I never heard another voice), I often discovered the shared toilets unflushed … but it was cheap, and I finished the website for the computer game Real Myst that I’d been working on since I arrived, after a week and a half of long hours. Then just as I finished I accidently trashed the lot. Yep, I was not a happy man after that. Luckily I’d already uploaded the site but I had to later redo some of the work, after paying a company to recover some of the trashed files.

In between and after all this tragedy and horror I did manage to have a good time in San Francisco; it’s an interesting city. I moved to a slightly better hotel room and rediscovered the joys of having my own bathroom. D, a friend of mine living there, was the perfect host, driving me everywhere, going out to many dinners and late night bar discussions, introducing me to some friendly people. One day I went on a hike through the Marin County redwoods with him and his new girlfriend. Once D and I went out for a beer and ended up playing pool with some English guys and their American girlfriends, then went back to their apartment until 4am, during which we made a a very hairy climb to the roof with several beers under the belt – fire escape ladders there are completely exposed and it was seven stories straight down to the street – but it was a fantastic view over the city. We were also amused to catch the sight of someone driving their 4WD through the neighbouring park, down the steps and over the pavement onto the street. Then it was back – slowly – down the ladder. As I headed down one of the guys looked at me and said, “we only have one rule here – don’t fall.”

Visited Alcatraz on an appropriately freezing, windy, rainy day. Watched grunting and slovenly sea lions grunt and be slovenly off Pier 59. Enjoyed a wonderful modern art exhibition – the Anderson collection – at the SF Museum of Modern Art. Walked miles and miles, with seemingly a crazy person and/or beggar on every street. In a strange way it was more shocking than India, having so many people begging on the streets of a major American city. Obviously the system misses a hell of a lot of people.

On Nov the 16th I boarded a plane to Spokane, Washington where I met my friend G, and also met the makers of the computer game Myst, at Cyan. For those of you that don’t know Myst is the biggest selling computer game of all time; a non-violent surreal kind of adventure through strange worlds that featured incredibly realistic 3D visuals. It was interesting to visit Cyan, where all the props from the game’s sequel, Riven, were on display, and after a whispered conference behind closed doors while I waited on their brown leather couch, and the signing of an NDA, I got to see some previews of their big new project. Met some very nice friends of G’s and was made to feel very welcome. On the 20th he headed home and I stayed on at the Ramada Inn for three days, redoing the work I had trashed in San Francisco. It was cold – teeth-aching cold – with old snow carpeting the ground.

On the 24th I flew to Seattle for a couple of days which despite the cold, wind and rain was an interesting and atmospheric city – I especially loved the Pike Markets near the water, a fascinating maze of low-ceilinged shops and a crowded seafood and produce market. Also went up the Space Needle (of course), saw sea otters grooming at the Aquarium, went on a guided tour under the streets of Pioneer Square (the original street level before a fire in 1889 levelled everything), got in a greatly-needed bash on the drums at the Experience Music Project, an amazing multimedia rock museum/theme park place (playing Wild Thing with a couple of American kids), wandered the streets and huge old bookstores …

After Seattle I flew to Colorado to meet old friend M and his wife K. Stayed at their place, but since they were at work for the rest of the week I took a Greyhound to Breckenridge, the ski resort. A real high point (literally – the highest point was one on the way there on the bus, 11,100 feet) of the trip up to then. The first day a guide and I on two snowmobiles went up through the fir trees to the wide snowy shoulder of a mountain, peaks on either side – right on the Continental Divide where rivers flow either east or west to the sea. We sped down the mountain; at one point I zoomed over a bump and left the ground. Exhilarating! The next day I hired some gear and had a day skiing down Peak 9 – a perfect day for skiing, a big snowfall in the morning and by midday clear and sunny. The view while skiiing down was just indescribable, the valley spread out below me, towered over by huge snowclad peaks sharply outlined by a bright blue sky. Soft, powdery snow that softly swished under my skiis and hardly anyone on the wide, pristine slopes. The Beaver Run chairlift was really high – it took about ten minutes to get to the top – so it was a long, wonderful ski to the bottom.

On my return I went on a day trip to Colorado Springs with M and K, checking out some underground caves and a natural park (The Garden of the Gods) loomed over by huge red rocks. Also the striking Red Rocks ampitheatre where U2 played back in the 80s. My friends were great hosts and we went out to dinner several times, eating, as Americans do, huge amounts of food. 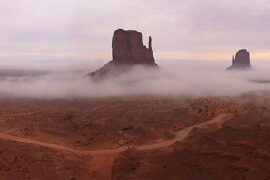 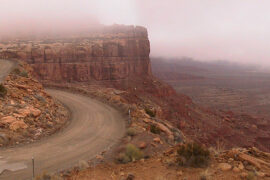