Arriving at that alternate reality in the American desert called Las Vegas, D and M and I got a room in the Monte Carlo hotel, and spent two nights cruising the casinos and a day at Hoover Dam. Vegas is totally different from my last visit ten years ago – the neon fountains that seemed huge and over-the-top then are now nearly forgotten corner decorations; old Christmas tree lights that have been replaced. Everywhere the deafening background noise of jingling poker machines, but Vegas seems more a big amusement park than a collection of casinos. The fashion now seems to be recreating outdoor environments indoors, whether it be Venice complete with canals or the streets of Rome or Paris; roofed with domed ‘skies’ painted with clouds that dim in the ‘evening’. I’m sure in a few years the whole of Vegas will be domed over and a sky painted on the inside – that way the climate can be totally controlled and sunsets can always be beautiful no matter the weather …

I did enjoy the ‘Star Trek Experience’ at the Hilton however, so everyone has some level of tackiness that rings a bell …

After the festivities of Christmas it was time to cross the country to New York. Before leaving, D and I in quick succession got struck down by some mysterious bug and were both horribly sick for a couple of days. I was beginning to think I would have to postpone my flight, but that morning found me healthy enough to get moving. D and M were on another flight and staying at the Waldorf Astoria as part of their work-funded trip; I had booked a tiny room in a hotel in midtown Manhattan.

An easy five hour trip to New York, through the madhouse of JFK airport, and a bus and taxi to my hotel, the Pickwick Arms on E 51st and 3rd, Upper East Side. The room was a bit of a cupboard but I suppose US$110 a night is cheap in this town.

My first morning in New York, and I opened the curtains to find the snow falling down and the streets covered by a thick white blanket. Snow in New York! Christmastime in New York! Perfect. In fact it proved to be the biggest snowfall in five years, a foot or more. I spent the day with a friend, G, and her flatmates, wandering through SoHo buying party provisions and winter gear, throwing snowballs, trudging through snowdrifts.

Instead of cars on the streets, makeshift snowmen stood on street corners. In the evening I met D and M at the Waldorf; by chance only a few blocks away from my hotel, and we took the subway to Little Italy and picked a restaurant (Da Nico) in which to celebrate my birthday. Waiting by the bar, we saw the mayor of New York come out of the restaurant where he had been eating and press the flesh, his bodyguards lurking in the background. As he left he poked his hand in my direction so I shook it and said eloquently “hi.” Well, one should always meet the mayor when visiting a new city, shouldn’t one?

The next day, the last of the year 2000, I wandered the streets, neck craned to soak in the tops of beautiful skyscrapers, trudging through freshly-plowed snowdrifts; the gorgeous art deco lobby of the Chrysler Building, the Empire State, the Flatiron Building and Union Square (where I had a coffee in a hip little place with beautiful people and a jazz combo in the corner). Soaking in the feel of New York.

Back updown I walked down Fifth Avenue and through Central Park, which was full of happy people tobogganing in the snow, revelling in the beauty of the park in its beautiful white covering. Snippets from a hundred languages caught my ear as I walked.

That night was a New Year’s party at G’s place, which was well attended and fun. Midnight was counted down with Dick Clark at Times Square on the TV and champagne. Got in some long conversations and met some interesting people, and wandered to a couple of other parties. Eventually got a taxi back to the hotel about 4am.

D and M and an old friend of D’s were having breakfast at a place in the Meat District; I showed up feeling seedy. After breakfast I went back to the hotel and slept again to the early afternoon, after which I went for another walk through the park. By the evening I was feeling myself again, and met another friend, W, in a bar in the TriBeCa area, followed by an enjoyable dinner nearby.

Right, time for some tourist stuff. The next day, lovely and sunny but very cold, I headed down to the harbour to catch a ferry across to the Statue of Liberty. Unfortunately I picked one of the busiest days of the year, and it took me two and a half hours of waiting in line to get up to the head, for a quick glimpse of the city skyline and harbour through tiny windows. For some reason I’ve always thought there was a bar and a promenade up there – in fact it’s a tiny little space that can hold about five people at once. Guess I got my sense of scale mixed up …

Wandered around Wall Street (this isn’t a street, it’s a pedestrian alley!),and then met D and M for drinks at the Oyster Bar under Grand Central, and then for dinner on the Upper West Side. Back at the Waldorf it was sad to say goodbye to my brother – it’s going to be a while until I see him next.

The next day, alone in New York, I spent a good few hours at the Metropolitan Museum, pouring over ancient Egyptian artifacts, masterworks from Rembrandt, David and Vermeer, ancient Assyrian reliefs – so much great stuff. Met W to see a film. The next day, to my shock, I was hit with sickness again dammit. I spent the day in bed, cursing my luck and feeling miserable. The next day I’d recovered; checked out, got a taxi to the bus terminal, and bought a ticket to Hartford, Connecticut, where I was to be staying with two friends for a few days, and thence to Boston. A long bus ride of over four hours through thick snowfalls and fog, but I was picked up from the Hartford bus stop and I was soon relaxed and comfortable at their lovely house. Two more of their friends arrived and we all went for a walk in the still night, me taking the opportunity to run like a lunatic through banks of fresh snow. A beautiful evening.

A couple of very relaxing days, pampered by my friends, followed. We visited the lovely Mark Twain house and a museum nearby, went to a farm at night and enjoyed a sleigh ride around the snow covered hills, harnesses and bells jingling, the moon occasionally shining through a veil of dark cloud. Several excellent dinners and big breakfasts. Lots of good conversation.

On the ninth it was time to move on and my friend was heading to Boston, so we drove the couple of hours north. In Boston I stayed with another friend, in an interesting suburb a bit like newtown in Sydney. He is studying at Harvard but we found time to go out a few times to a few bars, meet some of his friends, and to have a good wander through Boston, which seems like a nice place to live.

Wandered the Harvard campus. Explored the Freedom Trail, a tourist trail of noteworthy historical sites in the city. Some very interesting old buildings where I learnt a lot about the American Revolution – my friend was a good companion as he has studied the period; the facts of which are often somewhat different than the ‘popular’ version of events. Another day I wandered the grounds of Harvard University and nearby shops.

On the 12th it was time to head back to New York … this time by train. Six or so hours later I was back at the Pickwick Arms. The next day was another museum day, starting with the Guggenheim, a place I have been looking forward to visiting for a long time. It was a gorgeous as I anticipated; the central space just beautiful, the spiralling curve of the ramp leading up to the complex skylight. The effect was enhanced by some lovely ambient/world music playing for the Armani exhibition – while not particularly interested in the clothes, I found the display, music and atmosphere wonderful. And in a lower gallery was a small but excellent collection of modern masters.

Next stop was the MOMA, with some fascinating exhibits – minimalism, ‘white’ artworks, social protest; a real mixture. But the absolute highlight was a collection of their best masterworks – Matisse’s Dance and Picasso’s Les Desmoiselles d’Avignon were just amazing, especially the latter, which I studied so much way back at school. Also beautiful Kandinskys, Cezannes, a Brancusi sculpture, Rodins, Matisse paintings and sculptures …

The next day I got up to the top of the Empire State before the crowds and gazed out over New York; so much humanity crammed into such a small space. It’s strange what human beings replace nature with given the choice. I suppose it’s a metaphor for us and our history – a vast, crowded, seething mass punctuated by the occasional great folly or great achievement.

My last essential museum stop was the Natural History Museum, stuffed to the gunwales with dinosaur skeletons, an excellent Vikings exhibition, impressive tableaux of stuffed animals and humans in their habitats, the famous 3.2 million year old skeleton ‘Lucy’, a huge full size blue whale model suspended above the marine animals gallery, and more stuff than you can shake an anthropologist at.

In no hurry I collected my now compact bag (I’d mailed some gear, and my computer and video camera, to my friend in London), and walked to Grand Central, where I caught a bus to La Guardia airport. A two and a half hour flight to a stopover in Miami, and then a comfortable eight hour flight, and I was in South America. Now it gets really challenging … 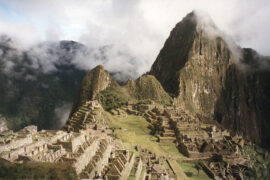