I’m writing now from a hammock on the balcony of our little wood-and-bamboo bungalow at the Elephant Conservation Centre (ECC), a few hours drive and a boat ride from Luang Prabang.

We were a bit rushed to check out of the hotel this morning and breakfast was slow in coming, so I think the manager thought we were trying to escape the consequences of some nefarious deed, or we had stolen something from our room, as he insisted we wait (with the excuse that they were checking to see if we’d left anything behind) until a cleaner had entered the room and given him the nod. Apparently staff in Laos aren’t really used to people in a hurry; it’s a more laid-back culture here. But finally we were in a tuk tuk for the short drive to the post office (the driver ripped me off 20K kip, but who cares), where at 10am the minivans arrived that were to take us to the ECC, and we introduced ourselves to some of our fellow travellers.

It was an enjoyable drive through countryside and villages. In our van we had a very talkative Australian couple, Darren and Sarah, an older Australian and his Japanese wife, and a younger French woman.

After about two and a half hours we were on less-travelled dirt roads and arrived at the shore of a wide lake ringed by jungle, there to board a boat that took us to the ECC. The place is set up a bit like a summer camp, with bungalows and shower and toilet blocks built along the ridge line of a small peninsula, and a dining and bar block. It’s all pretty rough and hand-built but comfortable and well-maintained.

After dumping our packs outside our assigned bungalows (I was initially a bit worried as we were given a bungalow with two rooms, but no one ever got the other room), we all went for a walk into the jungle, and before long got our first glimpses of elephants in the distance. We walked down to a covered platform on a small inlet of the lake and there had lunch, then saw the mahouts (the elephant keepers) bring their elephants down to the opposite shore so they could drink and bathe. Such beautiful, slow-moving, gentle animals. I can’t describe how different it is to see the elephants in their own habitat. They’re each with a mahout carer with whom they’ve formed a special long-term bond, being slowly and patiently taught how to be animals again after a lifetime of labour and abuse. And eventually, when they’ve formed their own small social groups, they’re released back into the wild. In fact, four are being released this weekend, we’re told.

We are just observers keeping a respectful distance, as it should be, not demanding entertainment or forced interaction, just experiencing the privilege of seeing these wonderful animals and how they spend their days.

After lunch the boat took us around the shoreline and back to the main camp. We listened to a talk about how the elephants were used in the logging industry (thankfully this is now banned in Laos), along with examples of the equipment used. Then we walked to a nearby hospital building to listen to a long talk on elephant welfare. Outside, metal scaffolding is the ‘operating table’ for keeping the elephants still during checkups and procedures.

Afterwards we walked back down to the shore where three elephants crunched on fat chunks of sugar cane, and we were allowed quite close to watch. Then we stood along the jetty as they walked down to the water and bathed.

It was time for the elephants to return to the jungle, so the mahouts climbed up onto the necks of their elephants (they have to do this to guide them), and we followed them into the forest. At one point the path split into two—the elephant path and the human path—and we had a wonderful close view of them walking along, especially when our path rose up to a higher level than that of the lumbering elephants.

Eventually we parted ways; they went back to the areas where they spent the night  (they are chained to protect, and be protected from, local farmers, but the chains are very long), and we walked back to camp, stopping to check out one of the plantations where they grow food for the elephants.

A few of us watched the sunset from our bungalow’s balcony. This is an absolutely beautiful, tranquil place without any other human habitation in sight, and the views over the lake, surrounded by jungle and distant mountains, are stunning.

Before dinner, we heard a fantastic, detailed lecture from the resident biologist, a passionate Mexican woman obviously far more enamoured of wild animals than people (as we are, I must admit), and we all discussed the subjects raised afterwards. Then we all had dinner together in the open-sided dining building, and a few of us talked and laughed over a few drinks into the night.

It was a cool evening and the hard bed (encased in a mosquito net) was quite comfortable. An animal rustled in the underbrush outside and some strange bird made a high, loud hooting noise. It took me a while to get to sleep, but the night was very quiet and peaceful and I eventually slept well.

Oh, it was our 16th anniversary today, but in all the excitement we forgot! 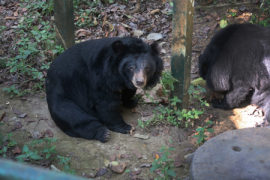 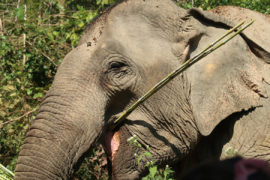