Well, we sure didn’t feel in the mood for a long journey, but we had no choice, so we killed time with a long breakfast at the 8th of July, walked to the bookshop (where I bought a good thick SF short stories book), and then got a cheap room off Ghandi Chowk for 150 Rs to lie down for a few hours before the bus at 3pm. I was absolutely dreading the 14hr bus journey: with good reason, it turned out.

We found the bus without too much trouble and then discovered it did stop in Jodhpur on the way, where we had to change buses – obviously my definition of ‘direct’ is different than the Indian one. This really pisses me off – being given information and then discovering it’s a complete lie.

Whatever, it was still 14 hours. The ‘deluxe’ bus was of course incredibly uncomfortable – the seat lock didn’t work and there was nothing to brace your feet on and the leg room wouldn’t have been enough for a small child.

There’s nothing much to say about trips like this. They are just endless when you’re on them and completely forgettable – except for a vague memory of extreme discomfort – when they’re in the past.

At Jodhpur there was the usual confusion to change into a smaller and even less comfortable bus. I wouldn’t have thought it possible, but I had even less leg room and had to brace my knees high up against the shifting back of the seat in front like I was sitting in the foetal position. Soon my bum would be numb and I’d have to try some other position – it was even worse than the train.

Someone had a bag stolen at the changeover – K was asked to watch them but some bastard managed to nick a bag anyway; too much darkness and confusion.

God what a nightmare trip. I was as sick as a dog, sniffing and snorting and coughing. Near the end, my thermals and money bag had squeezed into my crumpled gut enough to give me shooting cramps – I was getting waves of agony from my guts as though an alien in there was shifting its weight around. At a nameless stop I was coughing so hard outside the bus I almost threw up. A lot of the trip was on bus-wide, rutted sealed tracks that made me feel like I was in a washing machine on the rinse cycle. It was indescribably horrible.

Finally, at the very edge of endurance, about 5am, we came to Udaipur. An auto-rickshaw took us to the Sai Niwas Hotel (after we had to shout at him not to pick up the usual touts on the way, and show him directions), and both exhausted, sick, and me doubled over with gut cramps, we were let into the lobby to sit and await our room, which we got at about 8am.

I’ve never been so relieved by a hot shower in my life – I almost started sobbing! 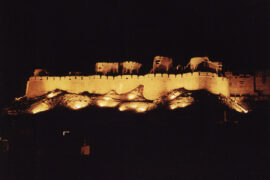 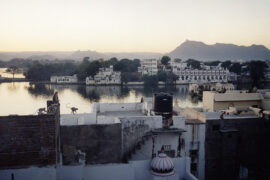