More of the same only lots worse for poor K. She woke in the middle of the night and began throwing up and getting diarrhoea and the whole bit. We don’t know what caused it; perhaps the buildup of phlegm and mucus in her stomach. I felt quite helpless and it was terrible to hear her wracking coughs from the bathroom – I hate to see her in pain.

Just after dawn I went out onto the quiet streets and bought water and toilet paper. Slowly she improved thank goodness – it’s now evening and she’s much better, even having toast and plain rice for dinner.

We’re now both at the stage where we’ve just about forgotten what the hell we’re doing in this country anyway! We just want to be well again.

I actually went outside three times today; it was very strange to step outside the little gate at the entrance door of the hotel! The second trip I went to the entrance of the palace nearby and had a soft drink and vege pakoras from a food place – the place was very busy; lots of tourists. The third time was as the sun was going down – I sat at the edge of the water at Lal Ghat for a little while, and then went to a shopping street and spent ten minutes in a little shop choosing material and paper for a man to make up a little rough notebook which I’m going to give to K.

Xmas Eve tomorrow. It’s starting to look like any exciting romantic images we may have had of Xmas in Udaipur aren’t going to happen. It’s a shame how reality can sometimes bring fantasies down to earth with a sickening thud!

I feel a bit like an old convalescent. The streets of Udaipur seemed lacking in magic when I went out too – that’s what being sick does to you.

There’s a dawn chorus every morning in India, and it’s not the sweet chirruping of finches or the crows of roosters; it’s everyone within 500 yards of your hotel room hoicking and coughing and dredging up the night’s phlegm accumulation to project to the pavement.

Below our balcony at Udaipur little kids gather on the nearby rooftops to endlessly repeat “hello? Hello? What is your name?” to the tourists on the hotel roof or on the balconies. Tourists have inane conversations with 5-year-olds that always end in “1 rupee-chocolate-pen?” or words to that effect.

We’ve taken to referring to the hordes of young men who go to so much trouble to find a good position from which to stare at Kylie as “warm boys”. I coined this after a particularly clammy handshake from one. 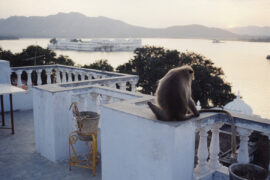 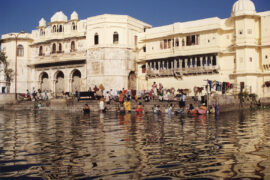