I can’t describe the relief we feel that we are taking the plane to Agra today rather than a train or bus! The contrast in ease and comfort is indescribable!

We rose at dawn and went down to the ghats – one step out of the alley and someone was asking “you want boat?” – only this time we did. We climbed into a small rowing boat rowed by a friendly 36-year-old man (married, six children) called Nathu. He turned out to be very talkative and easy-going. Luckily we had the best weather so far; it wasn’t as misty, and the red disc of the sun hung over the horizon as he rowed slowly against the current, south along the Ganges, Nathu chatting away all the while, me taking photographs. When we reached about where we walked to last night we turned around for the easier (for Nathu) row back to Dashashwamedh Ghat. Wonderful to see Varanasi from the water and a really enjoyable hour.

Nathu dropped us back at the ghat in front of the hotel – I gave him 100 Rs instead of the 50 we had agreed on. We had breakfast at the nearby cafe, then went back into the room, packed, paid, and walked through the alleys back to the main road, where we caught one of the persistent cycle rickshaws to the station. A uncomfortable trip, but I’m sure nowhere near as uncomfortable as the rickshaw-wallahs.

At the station we got swarmed by taxi drivers. We chose one to take us to the station; he and his partner piled us into a crappy old Ambassador. A very hairy drive to the airport; several times K’s hand tightened on my knee and I tensed all over as we narrowly avoided a head-on collision. Luckily we made it to the airport without mishap, and getting on the plane was a breeze. A quick 45 min trip to Khajuraho – the contrast with our train trip was almost painful – with a spectacular aerial view of the temples when we took off again. Then another quick fight to Agra. Perfect weather. A taxi straight to Sidhartha Hotel from the airport.

Taj Ganj – the area around the Taj Mahal – is much less built-up than we both imagined, just a small warren of narrow streets with budget hotels and restaurants. We went to the Lucky Restaurant for dinner and sat on the roof with an amazing view of the beautiful Taj until it disappeared into the darkness. 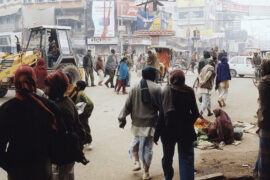 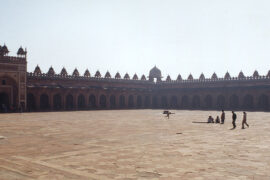