We woke early in time for a 6.30am breakfast and a 7am pickup by our driver (Ming) in a comfortable 4WD, and it was off into the countryside to visit some tombs.

It’s astonishing what these nineteenth and early twentieth century emperors got away with, and even more astonishing that they are still worshipped today; but then again, the version described on the information signs is very different from reality. Tu Duc, who ruled from 1847 to 1883 and whose park-like tomb complex we visited first, is presented as a sickly, sensitive, poetry-loving, wise ruler, when in fact he had 104 wives and countless concubines and his excessive tomb-building prompted a failed coup. He wasn’t even buried in the tomb: incredibly, 200 workers were beheaded to keep the true location of his burial place secret. This happened in the late 19th century!

The complex was beautiful however, featuring a lovely pond; peaceful in the early tourist-free morning, with an intermittent light rain adding to the somber atmosphere. But ‘modest’ it was not, despite that being the moniker (Khiem) bestowed on the tomb after the rebellion.

After an hour or so we drove on to the tomb of Khai Dinh, the penultimate Nguyen emperor and unpopular puppet of French colonials. This was a very different monolithic series of structures climbing a hillside and constructed of sculpted black concrete. The final tomb and shrine interior was supposedly inspired by Versailles, and is excessively decorated with mosaics and features a huge bronze sculpture of the young emperor (who ruled only 9 years). It was very strange to see a middle-aged man praying to this shrine.

Finally we visited Minh Mang’s tomb – somewhat like Tu Duc’s with its country ponds, but more conservative and symmetrical in layout, and culminating in a locked gate to a walled hilltop, only entered once a year on the anniversary of the Emperor’s death by his descendants. I looked through the gap in the doors and saw just a wooded hill, but the place was very evocative and mysterious.

Our tomb-viewing done, Ming took us south, driving at a slow and careful pace. We stopped for a quick lunch at a restaurant at Lang Co on the shore of a lovely lagoon, where I had 10 barbecued oysters.

Onwards, and over the Hai Van pass on the coast: sadly there was a white-out at the top, but we did stop for lovely views of Da Nang some way down the other side of the pass. Into Da Nang, a very modern, clean city deep in the throes of western-style resort development. We found ourselves only a few streets from the hotel my brother-in law manages, so I redirected Ming and stopped to say hello, which gave him a big shock as he hadn’t been expecting a visit without warning! We’ll hopefully see him again before flying out of Da Nang.

Before long we reached Hoi An. Ming drove us slowly through the streets to our hotel, where we were excitedly greeted by a bevy of young women in red dresses. Everyone is incredibly friendly and the hotel is new and beautiful. We’re on the top 5th floor, near the pool.

After a couple of drinks near the pool, we went out and walked through the night market and to the old town by the river to a restaurant called the Morning Glory. It was a truly stunning evening – streets lit up with coloured hanging lanterns, hundreds of people strolling about, lantern-lit boats and little candles floating on the river, neon, singers in the bars, outdoor restaurants, shops, stalls – a magic atmosphere. And it’s only a Tuesday night! We had a delicious meal and strolled around and across the river. It’s all definitely very touristy, but it’s still a beautiful place. 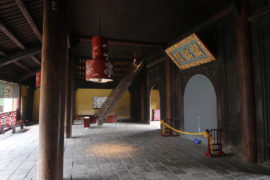 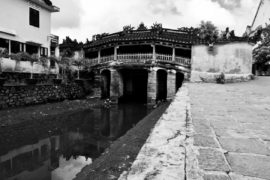