A really excellent day, thanks to our fantastic guide Duc, a 29-year-old guy who took us on a floating market tour in the morning and a cycling tour in the afternoon.

We met him and Emelie (a young woman from the hotel who is in training to be a guide herself) at 5.30am after a restless sleep punctuated by gongs and prayers from the nearby temple, barking dogs, and crowing roosters. Oh, and the Communist Party messages braying out from speakers on the nearby road, which began about 5am. Despite that however, Duc told us later he could tell by our initial positivity he was going to have a good day!

We walked down to the waterfront and got in a small boat, piloted by a (very funny) middle-aged woman whose name, unforgiveably, I never learned. The boat pottered up the river by outboard engine in the early morning light until we reached Phong Dien floating market, a small local market where people sold produce from boat to boat: a fascinating kaleidoscope of colour, noise, textures and movement. Our boat pilot constantly made us amazingly detailed origami-like creations out of plant fronds, and took great delight in us wearing and holding them and being the subject of silly photos.

We then headed for the much larger market at Cai Rang. To get there we motored slowly for about an hour through beautiful little canals, sometimes lined by little houses, other times through what felt like virgin jungle. Carol and I both agreed we suddenly felt a hankering to motor down the Amazon one day…

Duc was a fun and fascinating guide all the time: pointing out things, and filling in information about the local way of life, economy, and flora.

The big floating market was just amazing. In our little boat we were rowed right through the middle while big tourist boats, like buses, packed with lifejacketed picture-snappers, motored along the outer fringes. We had a fantastic breakfast, pulling up to a boat that sold hu tieu, a delicious beef (Carol had white radish) and noodle soup. Later we went aboard a boat and got a good view of the market from its roof, ate some pineapple, took more silly photos—egged on by our hilarious boat pilot—and looked at the boat’s interior.

On the way back we dropped in to a place on the shore that made rice noodles, and passing straight by the tourist shop (Duc rightly guessed we weren’t interested in that stuff) we went straight to the back to learn the way they are made, and have a go at transferring rice patty to drying table, and gathering handfuls of rice vermicelli from the noodle-making machine.

A slow and leisurely motor back to the shore opposite our hotel. On the way we decided to do the afternoon cycle tour with Duc and Emelie, as we were enjoying each others’ company so much.

We relaxed for a few hours in our room after a quick lunch (the food at the Rustic is pretty average, unfortunately), and at 3pm met Duc and Emilie again, climbed on bikes and headed down the road, across to an island on a local ferry, and along narrow concrete paths and past little houses and small garden plots. The weather had cooled, and though I was dealing with an uncomfortable bike with non-functioning gears, it was great fun; passing countless kids saying “hello!”, smiling locals, and riding along the canals.

We visited the house of a retired blacksmith and saw him and his wife work their tiny outdoor forge, and Duc and I crossed local bridges—single beams—made of bamboo (in one case) and a living tree trunk (in another). We visited a house where we helped make banana cake (pudding) with the very friendly woman of the house (and met her husband and cute kid)—three generations lived in the house. I mashed coconut and smashed banana, and made lots of jokes about how I had cooked the cake. We sat outside and had guava, cold tea and ‘Vietnamese strawberries’ while the cake steamed, then ate some—banana, rice flour and tapioca slices with a coconut and spring onion sauce. Very strange flavour but I had several slices to be polite!

Such lovely people, all day. As we rode back to the ferry countless people waved, smiled, and said “hello!”

After becoming Facebook friends with us, Duc said goodbye. Later he posted what a special day it had been for him too – “not just another tour”. Great guy and we had a perfect day with him and Emelie.

In the evening before dinner we checked out the nearby Cao Dai temple that has been projecting gong and chanting noises all this time. About fifteen people were inside, dressed in white robes, kneeling before an altar and chanting to a regular drum beat. The temple is decorated in brightly painted colours, and the focus of the altar seemed to be a large painted eye radiating streams of light. We quietly watched from the doorway.

We had dinner, organised tomorrow’s taxi, and collapsed on our hard beds to the background noise of dogs and karaoke. A magic day on the Mekong. 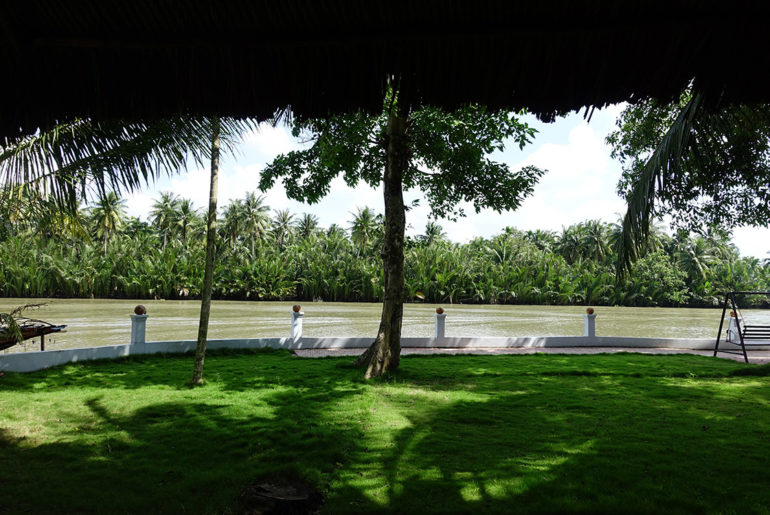 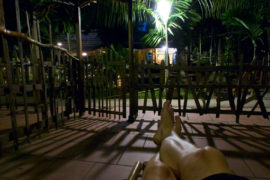 Hoi An to Can Tho
Mekong: Vinh Long 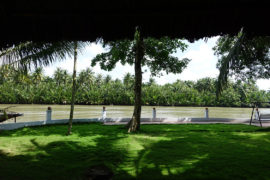