After breakfast we got a taxi from the hotel to Cholon (District 5) and the Phuoc An Hoi Quan Pagoda, an amazingly atmospheric Chinese temple. It was great to get out and about away from the more well-off end of town, to where it was more chaotic and busy. The temple was choked with incense smoke; huge spiral coils of it (with prayers or dedications attached) hoisted to the ceiling by poles, to hang there and slowly drop their ashes to the floor. The drone of electric fans sounded like the chanting of scores of monks. The ornate shrines were insanely detailed—gilt, candles, offerings of fruit, packages, flickering neon. Scores of people came in and out, holding handfuls of incense sticks which they held up to their foreheads with both hands as they prayed to the silent idols.

We walked a few streets to the Quan An Pagoda, another incredibly ornate shrine. Behind the main shrine was a U-shaped courtyard packed with smaller shrines, people milling about, and everywhere burning incense. The sound of chanting monks and nuns blended with the sound of a circular sander; a band kicked in after the chanting stopped. The gods don’t like peace and quiet, that’s for sure. Everywhere people clasped their bundles of incense and genuflected to passively watching, painted, seated figures. Hanuman the money god was among them, and a diorama of figures from the Journey to the West stories.

Lonely Planet told me the main goddess worshipped here—Quan An—is worshipped in Tibet as the Dalai Lama, who is the earthy representation of the god.

After a stroll down nearby busy streets filled with the smell of Chinese apothecary shops, we took a taxi northeast to the Jade Emperor Pagoda. This was just incredibly exotic, like a set from an Indiana Jones film. A large outdoor forecourt had a pool filled with huge catfish. A side enclosure held agitated turtles—I guided Carol away from that.

Inside, temple incense filled the air, and huge wooden statues, blackened by decades of smoke, loomed over the jostling, incense-holding worshippers. In a bizarre cave-like room to the left, carved wooden panels depicted the torments awaiting bad people in Hell. On the other side of the main hall, upstairs, was another shrine where I took off my shoes to enter. It was strange to see fashionably dressed young men on their knees, bowing to the ground before carved figures.

After some difficulty trying to find a more interesting place to eat, we fell back on a Belgian Beer Hall, recuperated in the air conditioning, and had some nibbles and a drink. Then we took a taxi back to the Opera House—a convenient landmark—and Carol went off shopping, while I went off to find a place to write my ‘letter to myself at 62’.

For those that don’t know, since I was 12 I have written a letter to myself 10 years in the future. Each time I open and read it, I write another and put it back in the same envelope, to be sealed for another decade.

Eventually I found the Pasteur Street Brewing Company, where I had a beer, enjoyed the air conditioning and the good taste in music, and wrote my letter. Later, Carol joined me and we had a couple more drinks. Excellent craft beer and a nice place to chill out.

Back to the hotel for a shower, then a taxi back to the Opera House, and a stroll around the corner to the Sheraton, where we had a drink in the rooftop bar on the 23rd level with a much higher view of central Saigon.

Then we walked to a nearby restaurant called Nha Hang Noon (our first choice nearby was booked out). It turned out to be perfect for our last dinner in Saigon—a big outside front courtyard, busy, cheerful, great food, and a fun waiter whom we had a laugh with.

We’re both quite sad to be leaving Saigon, and to have come to the end of this fantastic trip to Vietnam. It’s all far exceeded our expectations. I think what’s impressed us the most is how friendly the people we’ve met have been. (By the way, it’s now a year later as I write this and Carol is still in touch with many of them on Facebook.)

In the morning it’s off to the airport and the long journey home, via a change of plane in Hong Kong. 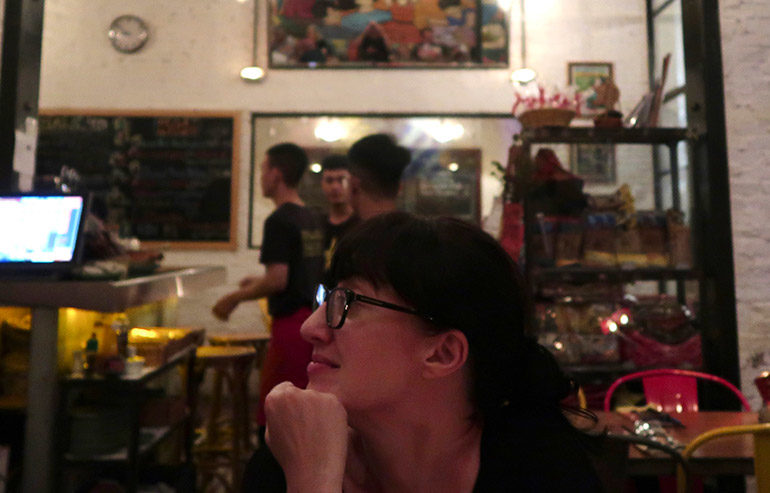 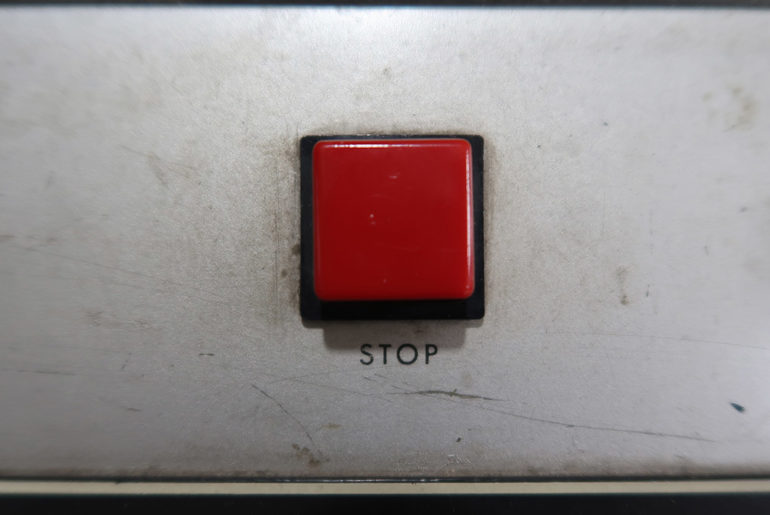 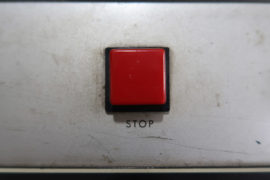 Saigon: Palaces and Museums
Three Weeks in Cambodia and Laos 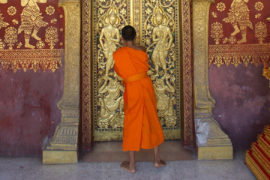