We were woken by the sounds of roosters and dogs some time around 4am, and then dozed until 6am. Beautiful dawn light over the rice paddies. I had a shower and cheerily exchanged greetings with my hosts. I played for a while with Saro’s 2 year old son, who in the way of children everywhere showed me all his soft toys; we also played the ‘hello!’ and ‘bye bye!’ game which I’m sure I’ve just invented.

A good breakfast, then we borrowed bicycles for a ride around the nearby fields. Coming back along a wide dirt road just watered down by a truck, we met a man on a motorcycle towing a load which had become stuck in the mud, so we got behind it and helped push him out.

Right now we’re back on the little balcony outside our room, under an electric fan. Soon we’ll be off to the Maisons Wat Kor, a far more luxurious accommodation choice, but I’ll bet it’s not as laid back, friendly and genuine; apparently Angelina Jolie and Brad Pitt stayed there a few years back, and I get the impression the hotel has been heavily trading on the event ever since.

This has been a great experience, if brief. It’s great to get away from the big tourist centres and see how locals live. Sitting here, I’m reaching that wonderful stage in every travelling holiday when I start to get inspired about things to do when I return. Getting some distance from the day to day routine recharges my creativity and motivation. It also makes me realise how incredibly lucky and spoilt I am, and how I should constantly make the most of the many, many opportunities I am lucky enough to have.

Sao put us in his tuk tuk, donned a helmet and scarf, and after saying goodbye to everyone (we left them with some NZ-themed pens and coasters as a gift for the kids) we headed off to the village of Wat Kor along a bumpy and very dusty road. We gave Saro a big tip which he really appreciated. He is a really good guy with not a trace of tourist fakery about him, and we got along really well in the brief time we stayed at his house.

The Maisons Wat Kor was a step up in luxury of course; a collection of shared bungalows around a lily pond and a saltwater pool. Photos of Angelina and Brad posing with the staff were prominently displayed. A friendly young woman gave a us a welcome drink of passionfruit juice and chatted with us until our room was ready. It’s a comfortable place, though I must admit it seems shockingly expensive in comparison with last night’s accommodation!

We rested for a while, had a nap, then went for a short walk to a nearby heritage house built in 1920, and were given a perfunctory little tour by the owner. Then Carol went back to our room, and I went for a walk, trying to find the riverfront described in Lonely Planet (I think it was actually describing Battambang rather than the village of Wat Kor). All I found were dusty roads, a concrete bridge, and lots of poor horses and shopfronts, but it was an interesting walk, kids cried out ‘hello!’ as I passed, and I enjoyed walking around on my own.

Back to the hotel where I had a beer, read a bit, and shaved and showered for dinner. An excellent 3 course meal for US$12—fried spring rolls, a delicious sour soup, beef pieces with rice and bamboo shoots, and a bean and coconut desert, washed down with a couple of Angkor beers. Carol had a vegetable curry. Very friendly staff and we had a few laughs with them.

Unbelievably, tomorrow we get on a plane and fly to another country—Laos. I feel like we haven’t been here anywhere near long enough, but we may yet return for a few days before we fly home—who knows. 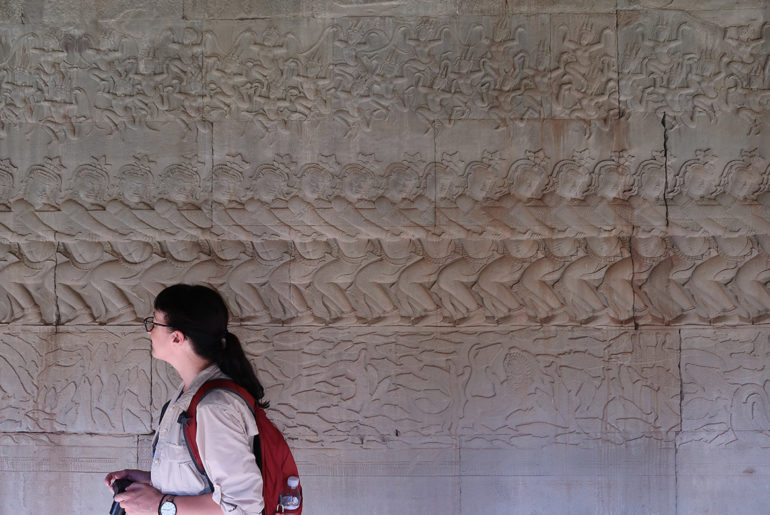 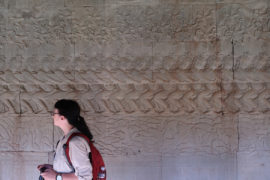 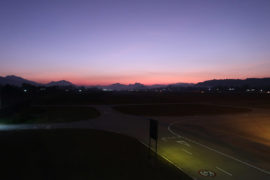