While having a (pretty average) breakfast in the restaurant area, Chheab joined us. After breakfast we packed, then he got about 10 photographs taken with us, we said friendly goodbyes to the Maisons staff, and we got in the car for the drive back to Siem Reap. Chheab first took us for a drive along the Battambang waterfront at our request. Later, as we drove along the highway, he sang the chorus of a popular Cambodian song  about Battambang and we all burst out laughing.

He’s a good guy and has treated us well. At Siem Reap airport we paid what we owed him plus a big tip, and we all hugged. Carol has set him up on Trip Advisor too. I fully expect to discover he is employing drivers in a few years!

We waited at the airport for a while until checkout opened, checked in our bags, went through, and sat a a bar/restaurant and had some lunch and a couple of drinks. Carol bought me a book about the Angkor temples. The flight with Vietnam Airlines was quick and easy.

We flew into Luang Prabang, Laos as the sun was setting. Very few lights glimmered in the dark, semi-mountainous terrain below. Constantine, a French man with a very strong accent, picked us up and we drove into town, which seems even smaller than I expected (in fact it’s about the same size as our own city of Nelson).

The Burasari Heritage hotel has an old colonial character and is right on a narrow road, across which are restaurant terraces above the Nam Khan river, that flows into the Mekong. On the peninsula between these two rivers is the main part of the Luang Prabang, so we’re right in the middle of it. We had drinks (a terrible martini and a sickly-sweet Singapore Sling) and something to eat, and chatted with a young waiter, before going to bed. 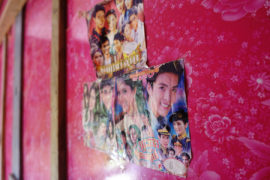 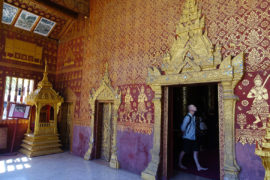