In the morning I walked down the street to an ATM and got some cash in US dollars, we had another delicious breakfast, and at 8am we said goodbye to the staff of the White Mansion and got in a Lexus with black and red seats smelling of strawberry air freshener for our drive to Siem Reap. Estimates varied wildly for this trip but we did it in 5 and a half hours, plus a half hour stopover at a big rest stop/shop/restaurant (the first in Cambodia, the menu proudly proclaimed). Our driver Vinchet tried half-heartedly to convince us he could be our driver around the Angkor temples, and later he tried to get us interested in a side visit to a ‘floating village’, but he didn’t press it and drove quickly and confidently to where we wanted to go. I crammed as much information about Angkor into my head as possible—you’d think I already would have done the research, considering I’ve always wanted to go there! 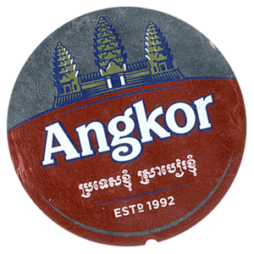 Finally we arrived in Siem Reap, and thence to the Khmer Mansion Residence. The hotel is only a year old, the upmarket feel only spoiled by the fact that it is very much a highly detailed concrete shell—concrete is everywhere, down to the built-in bedside tables and the sculpted decorations. Concrete doesn’t wear well and it looked chipped and stained and was in some cases drawn upon. The staff are young  and attentive however, and a woman named Chorvee welcomed us in her excellent English. We booked a sunrise trip to Angkor and a restaurant for dinner, then had a drink by the central pool.

After a short rest, we got a tuk tuk for the short 2km ride into the centre of nightlife—well, tourist night life—in an area around ‘Pub Street’. Like Hoi An in Vietnam, this little area of streets and alleys is closed to traffic and caters mostly to tourists. We had a good dinner at a restaurant called Khmer Kitchen (I had a pork mince with vegetables and rice, washed down with Angkor beer). A little place nearby sold banana gelato for desert. We wandered for a bit along the brightly neon-lit streets, lined with bars and restaurants and shops and packed with people, then grabbed a tuk tuk back to the hotel to get an early night. 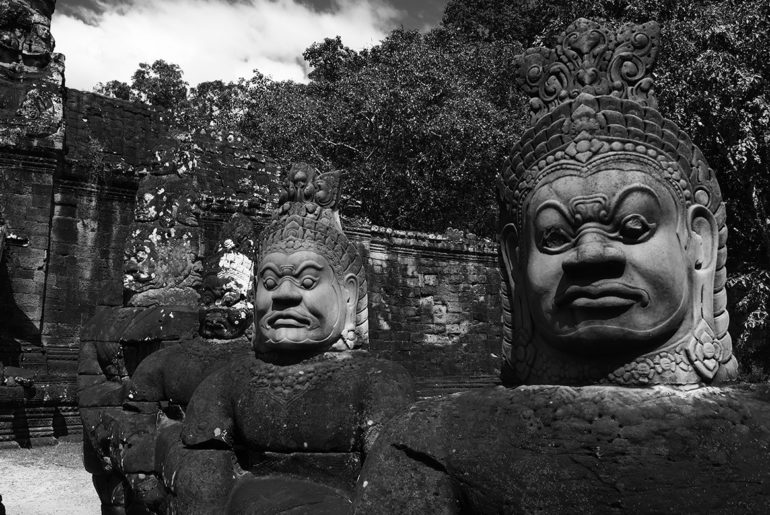 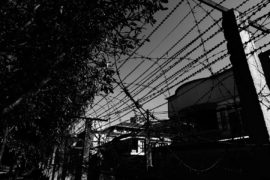 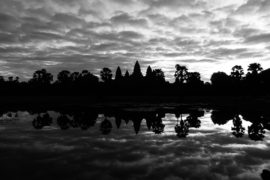