A long, exhausting, and very emotional day in Phnom Penh. After an excellent breakfast in the cafe attached to the hotel, a driver took us to the Tuol Sleng Genocide Museum. This infamous prison, also known as S-21, was once a school, but was taken over and used as a centre of torture and interrogation by the Khmer Rouge. An excellent audio tour took us through the rooms, either bare, or with only an iron bed and shackles and a shocking photo of the brutalised corpse found there, or with rows of partitions covered with hundreds of photographs of doomed souls. Thousands upon thousands of innocent people entered these walls and were tortured to death by the petty, paranoid agents of an insane despot—Pol Pot.

We had previously watched several documentaries and done some reading on the subject, but it is nothing like actually being in such a place. Hearing the stories, I found myself constantly holding back tears. In one block, the Khmer Rouge had smashed doorways through adjoining walls to join a row of rooms, and built shoddy, tiny cells out of breeze block and brick. People were tortured for weeks, forced to dictate ludicrous confessions, then taken to the killing fields to be bludgeoned to death with farm implements and buried in mass graves. The stupidity and paranoia of such a regime —that lasted only 3 years and 8 months, yet wiped out at least 2 million people, a quarter of the country’s population—beggars any description.

Some of the tourists, to my disgust, ignored the obvious signs and persisted in taking photographs. I told a young man to put his camera away when I saw him take a photo of the rows of victims’ photographs. Who could take such images home with them; how lacking in empathy can some people be? I didn’t get my camera out at any point; here, or at the killing fields.

We were there about 2 and a half hours and listened to every entry and read every display. I found it gruelling and difficult, but a necessary thing to witness. 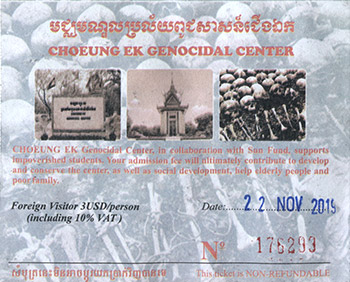 We were then driven out of town to Choeung Ek, known as the Killing Fields. In this peaceful park of fruit trees, thousands were brutally murdered. The mass graves are now undulations in the grass, or fenced-off rectangles of dirt, and the park is dominated by a huge memorial stupa with glass walls and multiple shelves  packed with skulls and bones. I found the stupa very difficult to enter; the space was claustrophobic and there was a sickly smell, and the way the skulls were organised according to the implement used to kill the victim made me feel a bit sick.

Again, there was an excellent audio tour that interspersed dry facts with horrific personal testimonials. At one spot, the audio recreated the last sounds the victims would have heard—the loud throbbing of a diesel generator and the inane propaganda songs blaring through loudspeakers, turned up loud to mask the screams.

What is usually a 4 hour excursion had lasted 6 hours, and then we got our driver to drop us at the National Museum of Cambodia, where the beautiful and peaceful stelae and sculpture of Pre-Angkor and Angkor civilisation were a much-needed contrast to the insanity of the Khmer Rouge. We had lunch at the Museum cafe and wandered the exhibits and the lovely central courtyard. Brahmanic deities and Buddhas gazed serenely into the middle distance, but as always, I was moved to ask, where are gods when people really need them?

We walked back to the hotel, with a slight detour—navigating the streets is a bit difficult—and got back some 8 and a half hours after we’d begun the day.

After a rest in our room we headed out again, taking a tuk tuk (auto rickshaw) back to the museum to see an excellent traditional dance show in a pavilion in the grounds. It was really professional and the music and movements were very exciting and different, and the performance had a good sense of humour too. Afterwards we walked to a restaurant called Romdeng, also set up to aid social programs and train street kids.

We tried to walk back from there but my usually pretty good navigation skills deserted me, and the area began to feel a bit isolated, dark, and dodgy, so I grabbed a young guy in a passing tuk tuk who took us back to the hotel (luckily I had their business card with me). I tipped him well!

That was an exhausting day and we packed a lot into it. As Carol pointed out however, it was good, after witnessing so much horror and cultural destruction, to finish the day by watching a show performed by young people discovering and preserving their cultural and artistic history. 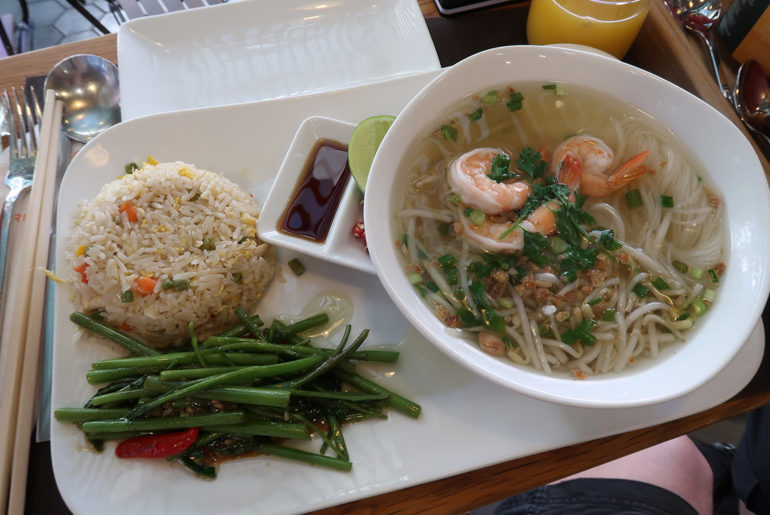 Back to Phnom Penh 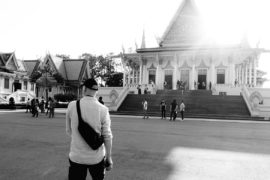 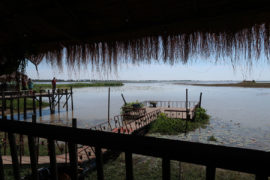