Not the most comfortable of nights by any measure; we tossed and turned all through it. I had my scarf over my head to keep warm, and we had each other’s body heat, but it was a very cold night and the thin quilts were barely enough to cover us and keep us warm. The bed was so hard my hips ached from contact with the floor.

We were up literally at cock crow—a rooster trumpeted at high volume right by our heads on the other side of the bamboo wall—and crawled out into the early morning, still fully dressed and unwashed.

A fire was burning in the dirt yard and we sat around it talking with Sin and the owner of the house, sipping gratefully from cups of sachet coffee. We gave the owner a pack of NZ-themed coasters as a gift and he was very intrigued by them, and seemingly pleased (he didn’t speak English, so Sin translated). The village head man appeared with his ledger and our visit was recorded and Sin gave him some money.

A breakfast of eggs and sticky rice, then we said goodbye and left the village, still marvelling at how incredibly fortunate we are to be living our ridiculously privileged life of comfort. Most of the village people live hand-to-mouth, only visiting the nearest town maybe once a month, and have to somehow find the money to pay for even basic education for their children (so much for socialism in Laos). We were very happy we could contribute to the village fund, if only a little bit.

A lovely morning walk, through teak and (Chinese-owned) rubber plantations. We sat for a while with a family among the rubber trees. Eventually we arrived back at the river, crossed a bamboo bridge, and got into a boat for a trip down the river and to a touristy waterfall spot (though virtually bare of tourists as it was the dry season and the waterfalls had all but dried up). We had a surprisingly good lunch at an outdoor restaurant. Then back to the river for a short trip back to yesterday’s original starting point, and a truck back to Luang Prabang.

We gave Sin a generous tip before we left at the waterfall. He has been a fantastic guide, full of information, great stories, and even political history. He’s not fluent in English by any means, but we understood him well enough, and had long conversations as we walked. We particularly loved the story about his friend who was forced to be a monk by his parents (who were trying to reform his ways), who emotionally blackmailed Sin (“if you loved me you’d do it!”) to bring him clothes so he could escape over the monastery wall at night to go drinking and eating (monks can’t eat after midday). And who also told him he wore underwear under his robes during the morning alms giving, but not usually while at the monastery. Bad boy monks!

The truck dropped us at a hotel called the Apsara, and we said warm farewells.

After a shower and repacking our packs, we went out for a couple of drinks, then bought some things from some local handicraft shops that help Lao tribal people. Then we had dinner at a nearby restaurant.

Annoyingly, I seem to be coming down with something—I’ve had a steadily worsening little cough for a few days now. I was hoping to see the trip out and get home healthy, but it seems to be getting worse. I’m dosing up on antibacterial throat gargle and saline nose spray, so I may yet hold it off.

Very nice to be sleeping in a comfortable bed tonight, though we definitely could have extended the trek another day and night at least. I can’t get out of my head a new appreciation of how incredibly lucky I am. 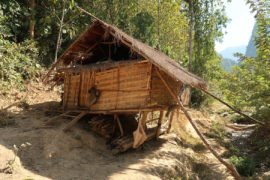 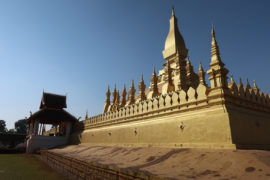