Breakfast in the hotel cafe, then we shouldered our packs for the short walk to the Tiger Trails office, where we chatted briefly with an older American from Washington State, soon to cycle for 10 days all the way to Hanoi. Which made us feel very lazy.

When the office opened we met our guide Sin Sai, a young, lightly built Hmong guy whom we immediately got on well with. By the time we’d ridden in the back of a truck for a while—dropping our main packs off en route at the main Tiger Trails office—he’d told us in great detail hall about how he had met his wife, their upcoming baby, the process of mollifying his new in-laws and assuring them he wasn’t a bad guy, his wedding, Hmong traditions and more. We immediately knew we would be getting along well on this trip.

We were dropped off at a kayaking depot on a river, and after a short wait climbed into a long, narrow boat with the usual engine and long pole with a propellor at the end, so common here. This took us across the river to the starting point of our trek.

Sin was very clear about the various phases of the trek, and soon our slight fears about the difficulty disappeared as we realised any steep parts were actually pretty short and easy. Sections would have been slippery going in the wet season, but now it was all dry and pretty easy walking.

We soon arrived at Sin’s wife’s village and stopped for a break at her parent’s house (no one was home). The village was pretty basic, dry and dusty, and the locals have to walk fifteen minutes to get water. We began to realise that Sin had had a pretty poor, rural upbringing, and started to get an insight into how poor rural Lao people actually are.

We walked past a very unsafe-looking (Chinese-owned) quarry just outside the village, then headed up into the forest. After a while we walked through a bamboo forest followed by local cows, bells tinkling around their necks; they belonged to Sin’s in-laws. We arrived at the next village and a lovely spot for lunch on the banks of a pond, where Sin brought out palm-wrapped packages of pad thai for our lunch. He hadn’t seen his in-laws for about a month, and carried his little sister-in-law around as his mother-in-law and another woman laid out their embroidered wares on tables. After lunch we bought some little purses and other items. Dogs, pigs and chickens played and pecked around the pond. A man fished with a net on a raft.

After a break we walked on past beautiful mountain views, over handmade stiles over fences, and finally reached a new dirt road bulldozed through the forest that was about to link these isolated villages to Luang Prabang. As much as it was sad to see this road plowed through the greenery, it’s also hard to deny local people the opportunity for access to commerce and medical care, after who knows how many generations of isolation.

We were soon to see how desperately it was needed when we arrived at Huoy Fai, where we were staying the night, and were pretty surprised at how poor the village was. It is the closest I’ve personally seen to the cliched conception of an African village—largely bamboo-built huts, packed dirt floors, dirt and dust everywhere. Subsistence living.

Thankfully tourism is bringing a few dollars to this community, and volunteer work has built a much-needed school. A few small concrete buildings are also in the process of construction.

We stayed in a bamboo-built shack of six rooms in a row; our room was about the size of the thin padding on the floor that served as a mattress. A mosquito net covered this, and that was it.

Before dinner we had a bit of a wander through the village, got harassed by a couple of cheeky young children—one was covered with dirt and brandished a stick with a small unripe banana stuck on the end—but were generally ignored by the locals, who are very used to the occasional tourist wandering around.

As the sun disappeared we had a dinner of soup, greens, bamboo shoots and sticky rice, then talked with Sin for a while by candlelight.

We crawled into our hard and uncomfortable bed about 7pm. A generator chugged away in the darkness. We read our glowing iPhones for a while (no wifi here!), then tried to sleep. 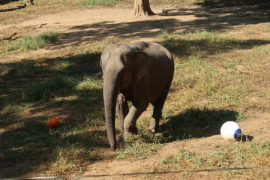 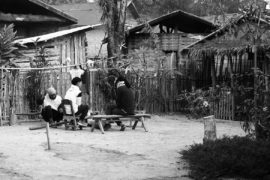