For once we had a bit of a sleep in, then when the desk clerk asked us where we were going and we answered the Cairo Museum, he told us it was too late and tried to sell us some bloody pyramids trip! C was especially pissed off by this. They seem to think we’re incapable of thinking for ourselves. We went out and grabbed a taxi – at least we’ve got the hang of that – to Tahrir Square. Cairo is far too exhausting after laid-back Luxor and we’re feeling the strain.

Spent a bit of time in the Cairo Museum, the highlight of which was the treasures of Tutankhamen’s tomb – wonderful objects – the throne, multiple coffins and of course the famous gold mask – very beautiful. Other highlights were the black statue of Chephren, the painted nobleman and wife statue and the strange, very realistic statues of Akhenaton. C wasn’t feeling 100% so we left early and sat outside – bloody tour groups were also swarming everywhere.

I’m getting more and more exhausted – I’ve now got a cold – probably from the sir conditioning in the train – and while my resistence was low got a bout of the ‘Pharaoh’s Revenge’. Spent the evening in bed sick – bit of diarrohea but nothing serious. Felt terrible though, couldn’t eat. We’re both just about ready to head home. 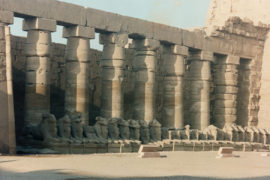 Luxor to Cairo
Cairo: Back to the Pyramids 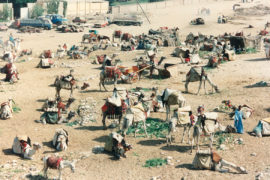