The train left for Luxor at 12 noon today, so we got up relatively early, had breakfast and got organised. Left packs at the hotel (noon check-out) and took a taxi to the Marriott Hotel so I could ring Dad. Finally we’ve worked out the trick to getting a reasonably priced taxi in Cairo – just jump in, then pay what is a fair amount when you get there. If they ask for more, give them a “you-know-and-I-know” smile and don’t back down. This worked smoothly for three taxis this morning.

Anyway, the Marriott hotel is a beautiful, over-decorated Colonial place, though not quite as decadent as I expected. I rang Dad collect and arranged to get some money temporarily put in my Visa account for the flight home.

Taxi back to the hotel, near which we bought a few provisions for the train trip and got a torch for tomb-exploring. Got our bags, checked out and taxi to Ramses Station. We had a while to wait so we sat in the station ‘cafeteria’ and watched the chaos within the station building – Egyptians running about. We were the only non-Arabs in the place and felt conspicuous, though we’re getting used to blending in a bit.

I even recognised the arabic numerals when they came up on the arrival/epartures board. No English written anywhere, but with a bit of help from official and non-official locals we found the train and seats with no problem. Quite a comfortable car, air-conditioned, not many people and lots of room.

Then followed what became about an eleven-hour train ride, up the Nile and deeper into Africa. the view out the window was fascinating; through the brown urban junkyard of the Cairo ‘suburbs’, past small and large villages where people (especially kids) stared or smiled or waved, and beside the Nile for most of the way, past palm groves and neatly laid out lush fields, people pumping water, riding donkeys or sitting together in the shade. I read a bit of Let’s Go and all of C’s war thriller which was garbage, munched on a few biscuits and looked out the window, but as the sky glowed red and darkness descended, there wasn’t much to do but stare at the blackness or the reflections in the window. Coming towards Luxor we began to pass the bars of green and white neon that anachronistically decorate many of egypt’s minarets.

We began to get ready to move but a middle-aged man in a blue sarong told us in his few words of English that we weren’t at Luxor yet. Sitting across the aisle from us he pointed to himself and said something I didn’t catch, then opened his shirt and exposed a green bicycle chain attached to a holster with a solid-looking gun in it.

“Ohhh …” I said, and realised he’d been saying “Luxor security man”. I wasn’t going to argue when he asked for a cigarette.

The whole trip was completely hassle-free though. As the train shuddered along (the rhythm of it crossing the rails was stuck in my mind and driving me crazy), the silence inside the carriage was joined by the security man singing softly in Arabic; what sounded like a sad song.

It was almost midnight when we got to Luxor, and the train hadn’t stopped before a man jumped on and started hawking his hotel. I was feeling really good and just smiled and said “la, shokran” (no, thankyou) a lot, but C was in a rotten mood and getting angrier. I said “just be polite but firm” or words to that effect after an Arab had murmured “fuck off” when she rudely told him to go away (“imshi, imshi”). This kind of hassling is a fact of life here, no use getting angry about it. That was the proverbial straw however and a bit later when I asked if I was OK I got snapped at. I counted slowly to ten as we walked to the Oasis Hotel.

The Oasis is great, 10 EP a night and a friendly proprietor, and though we seemed to walk up several hundred flights of stairs to our room the view and the height of the balcony is great. When we were dropping bags C and I had a blow up argument. Then I went out onto the balcony for a cigarette. The next morning everything was OK though and she was in a much better mood and nothing was said of the incident – I also have a much better time when she’s in a good mood; it’s important to be good company for each other. 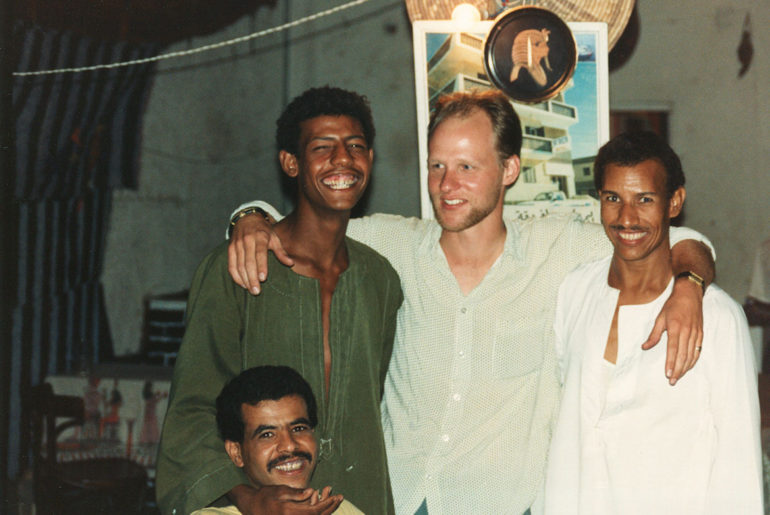 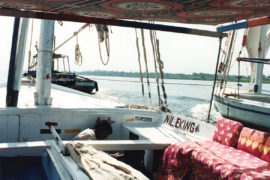