We spent the first half of the day travelling from Kyoto to Koya-san – from city to the mountains. First was a train to Kyoto station, where we grabbed a small breakfast in a station cafe; then a train to Osaka, then a 20 minute loop line train to Osaka-Shinimaniya; then – well, it was supposed to be an express to Gokurakubashi, but the ticket office sold us the cheaper ‘all stops’ version with another change on the way. So it was quite a complex journey.

Luckily, all you have to do on Japanese stations is ask a uniformed, white-gloved station guard, who are invariably helpful and informed and know enough English to send you to the right platform or confirm you’re already there. So we made it up into the wooded mountains and Gokurakubashi, the last stop on the line, without major dramas.

From there, it was directly onto a cable car/vertical railway that took us on a very steep five minute trip up the mountainside to Koya-san bus depot. Then – finally! – a short, winding bus trip into the town itself. We walked ten minutes and found the temple where we’re staying the night. Shukubo (temple lodgings) are the thing there, and there are scores of temples – all pretty much booked out, according to Carol. They obviously do a thriving trade.

Yochi-in is the temple where we’re staying, and we loved it immediately because we received such a warm welcome from ‘Roger’ (his nickname), a priest here, who has a beaming smile and is incredibly friendly. Our room is spacious, our futons were laid out, and we received tea and a sweet while the ‘house rules’ were explained to us (dinner and curfew times, bathing times, etc).

After getting organised we headed out again, grabbed something for lunch, and walked the length of the town to the main entrance to Okunoin, the huge Buddhist cemetery here that features the mausoleum and shrine of Kobo Daishi, the founder of the Shingon sect of esoteric Buddhism – who is apparently still meditating in his tomb and is going to be the interpreter when the future Buddha returns. Or not – I’m thinking probably not, folks.

Still, a lot of people believe in this stuff so there’s a lot of people buried here to get front row seats on their version of the Second Coming. There are even memorials to dead workers sponsored by corporations – Nissan and Panasonic were two I noticed, complete with stone graven logos.

Frankly, I thought the only thing worth our respect and worship were the beautiful, tall, old trees.

But most of the cemetery is a wonderfully atmospheric collection of moss-covered gravestones and stone Buddhas (each with their little red bib and offerings of money and sweets), loomed over by tall, straight, ancient cedars. Despite a stretch ruined by the ubiquitous sound of an effing leaf blower (please, let the inventor of that worst example of the decline of civilisation shovel shit in hell for eternity), it was beautiful, peaceful and evocative.

The shrine itself was immense; the sound of a chanting monk (who had an excellent voice) sadly continually interrupted by the ‘ching!’ of money hitting money as coins were thrown in the offering box. Both music to Buddha’s ears, one supposes. Religious slot machines, the constant flow of money into the pockets of the so-called spiritual from the pockets of the superstitious. In typical form, there were more diversions to entertain the faithful – a stone to lift that is apparently heavier the more sinful you are, for example.

Frankly, I thought the only thing worth our respect and worship were the beautiful, tall, old trees. So I put my hand on one and wished for its long life and happiness instead.

We walked back to the temple and I bathed in the onsen – by myself unfortunately; no one else was around so I enjoyed the bubbling hot bath sans sociability! Probably a good thing as I have no idea whether it’s the done thing or not to chat while relaxing naked in a hot bath with strangers. Carol then tried out the women’s bathing facilities. Then we got into our yukata robes and shuffled downstairs and down the corridor to the dining hall, where a delicious traditional vegetarian meal (shojin-ryori) awaited, which was excellent. Carol had warm sake and I had beer – luckily the rules don’t preclude alcohol! The other guests kept to themselves, though we exchanged a few pleasantries with a younger couple next to us at the end of the meal.

The walls are very thin of course and we can hear every whisper and movement of the guests next door (an annoying couple of young girls who didn’t shut up for hours), but it’s very atmospheric staying in a temple building, and it’s wonderful to be out of the city and in the cool mountain air. 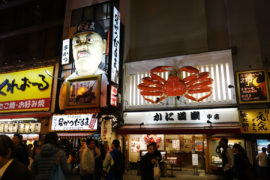