A long chat over coffee with J in the morning, then I packed my bag and said goodbye to them. From the waterfront I got a taxi to the otogar, then a dolmus to Edermit. As soon as I got off the dolmus I was bundled into a bus heading for Canakulle.

The weather here is my least favourite kind – you think it’s quite pleasant, then after a minute walking walking you’re drenched in sweat. I got a room at the Hotel Efes, with white-tiled floor vaguely reminiscent of a hospital room or prison cell, and went for lunch and a walk.

For a while I sat on the shore and contemplated the fact that it was at this place in 481 BC that Xerxes I of Persia led his army across the strait on a bridge of boats en route to attacking Greece. I tried to imagine the ancient army and the vast numbers of ships. I walked along the waterfront for a while, feeling a bit melancholy and very much alone. I’m a bit tired of travelling by myself I think.

The cats are howling outside my hotel room as I write.

I booked a Gallipoli tour tomorrow and a bus on to Istanbul, and at 7.30pm returned to watch the old Australian documentary The Fatal Shore, an old tape with bad sound, about the ill-fated offensive at Gallipoli in WWI. Suddenly I was surrounded by Australians. One girl talked too loud with a horrible screeching accent, one guy looked like a fat greasy biker, and they all seemed to be stereotypical young Aussie travellers, and people I felt I had nothing in common with.

And everyone seems to be sick! Endless coughing … somehow I’ve also caught a cold and my nose is blocked.

One more unpleasant incident to wrap up the day. While standing outside a pack of street kids came up and started gabbling to me, then to my complete shock one behind me slapped me hard on the back of the head! I was so taken aback – it was the first time I’d been hit on any of my trips – I was hit by another kid before I’d recovered enough to start threatening them. The owners of the hotel where the film was being shown came out and we chased them off – gypsy kids, he told me. Little bastards. I’ve been so lulled into a false sense of security by the friendliness of the Turkish people that I’d really dropped my guard. What a shame things like that have to happen near the end of a trip and leave a bad impression.

Well, I came to visit Gallipoli and I will, then the day after tomorrow I’ll be back in London. I’m tired, hot, my clothes smell, my back is sore, I’m lonely and I’m fed up. Traveller’s exhaustion is setting in I think. 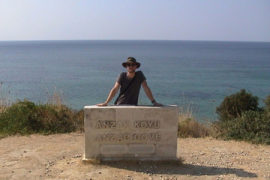