An excellent breakfast of bread, coffee, an egg, fruits, tomato and cucumber. Afterwards I strolled down to the otogar bus station and caught a dolmus (a shared taxi) out to Ephesus. It dropped me on the highway with about a one kilometre walk to the entrance. 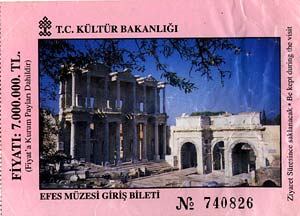 The Roman ruins were astonishing, featuring an incredible 25,000 seat Great Theatre and the beautiful facade of the Library of Croesus. There weren’t as many coach parties around as I had expected, and I enjoyed several hours picking my way through the ruins and sitting on the steps of an ancient fountain in the shade. In a huge covered excavation site Roman terrace houses were being uncovered and restored, complete with intricate mosaics and the remains of wall paintings. The feeling of a thriving city was easy to imagine despite the ravages of more than a thousand and a half years.

I was beginning the three kilometre walk back to town, and starting to regret the decision due to my very sore back, when a man on a red tractor with a trailer behind it drove out of the vineyards by the road and stopped ahead of me, leaning back to enquire “Selcuk?”. He motioned me up beside him on the tractor and I got a high bumpy ride back into town, the driver tooting his amused friends as he drove by, and refusing payment with a “no problem”. Friendly people the Turks. 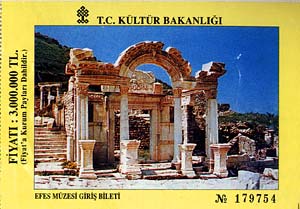 After lunch and a read of the English newspaper The Turkish News in the same courtyard as yesterday, I visited the local museum and looked at some of the sculptural remains from Ephesus, including the head and hand of a seven metre tall statue of the Emperor Domitian.

The afternoon and evening I spent at the wonderful Homeros Pension where I am staying, having a long conversation with a young Slovenian girl, watching the sun go down on the rooftop terrace with other travellers, and having dinner and raki afterwards. The Turkish owner D and his cousin A regaled us with stories of their adventures into the night.