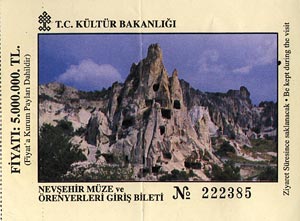 It was a day for clambering through rock-cut chambers and I certainly poked my head into a few. After breakfast, armed with video camera, travel hat and water pouch I bought in Cuzco, Peru, I walked the one kilometre to Goreme’s Open-Air Museum with its Byzantine churches, chapels and monasteries cut from a valley of rock spires and cones. Many of the interiors were covered in eleventh and twelfth century frescoes. Those in the restored Karanlik Kilise (Dark Church) were especially numerous and rich in colour.

Unfortunately great tidal waves of endlessly chattering bus tour groups swarmed over the site like fat ants over a disturbed ant hill. In one church I was crammed in with a French group and, not realising no videos were allowed, I took out my camera, only to have their guide roughly grab my arm. A simple ‘no’ would have sufficed. Once again I vowed never to tour a country on a bus tour like a sheep. It amazes me how people struggle up the steps into a rock-cut church covered in ancient frescoes, only to jabber their heads off and then leave with hardly a glance about them. Why do they even bother?

After leaving the site, free of guides and gabbling idiots, I clambered up into the hills alone and worked my way along a ridge, poking my head into quite a few of the endless doorways that honeycombed the weird formations. I found one chamber that featured the remains of a long refectory table, and another two joined by a long corridor that turned twice within the rock. It was a bizarre landscape, half natural, half manmade. Sticking my head into holes in the rock I felt like an insect looking for pollen.

I got back to Goreme after lunchtime and had lunch and a beer in a cool cafe, watching the end of an American film as I ate my sandwich, and chatting with a Canadian couple afterwards. I bought a ticket on a day tour to some nearby sights tomorrow, and a night bus ticket to Selcuk, near the Aegean coast. A long twelve hour trip I’m not looking forward to …

Later, I walked around the old town streets again, and suddenly from a balcony a woman caught my attention and invited me into her house. Curiously I followed her inside, took off my shoes and found myself in a room where her husband, a tailor, was sewing on the cuff of a pair of trousers. I sat, was brought a plate of grapes, and some socks and bags his wife had made. I bought a little bag for my niece and drank some tea. An older woman – a neighbour, I later discovered – dropped by, and she and the tailor talked animatedly while I sat between them wandering what to do next. I decided my video camera would break the ice and it did just the trick – I filmed their two children, and then the neighbour, the tailor, his wife, and their ancient grandmother, and played back the video to much gasping and laughing.

The tailor, whose name was E, and I began talking, and it emerged through his limited English that he was quite a philosopher, and mused on the universe during his bouts of quite severe meditation (fasting for 45 days at one point). He vividly acted out his vision of Jesus, the angels and the Day of Judgement. And yet he’d named one of his daughters a variation on the word ‘evolution’ (and the other ‘Snow Blossom’. His own name meant ‘Doesn’t Ice’ (Freeze).

We talked for a quarter of an hour about his theories that the universe and the self were one (and Jesus was Sirius, and Mohammed was the sun) and his visions (seeing galaxies that were all in the ankle of his foot) and I was fascinated. I left on great terms with their address, promising to send them a copy of the film (on a CD, at his suggestion!) A very strange mixture of superstition and erudition, mysticism and ignorance. Not only a tailor then.

I had dinner outside a small resturant, caught the latest news about the terrible mess the world could soon be in, and went to bed, exhausted. 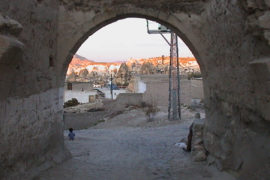 Ankara to Goreme
Goreme: an Underground City and Selime Monastery 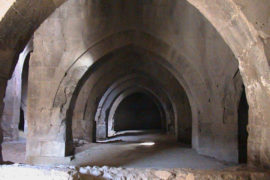