Packed my bag, left it with the pension and walked to Turtle Tours, with whom I’d booked a day-long tour. My back is really starting to worry me; it seems to be getting worse not better. I hope I haven’t fractured a vertebrae because the area is swelling – I’ll get it x-rayed when I get back to London. Right now I’m struggling to function normally while feeling like an 80-year-old.

At 9.30am the mini-bus was filled with myself, four Japanese, a Dutch couple, an Italian couple, a French couple and our guide, E. First stop was a view over the nearby Pidgeon Valley, where we received a potted history of the region. Then on to the underground city of Derinkuyu, a fascinating scramble through deep rock-cut rooms, eight levels of them. The first dated back to Hittite times, 4000 years ago. For me it was a dream come true, going down narrow underground stairways, into little rooms and looking up deep shafts. Probably the worst thing I could have done considering my back however as I frequently had to bend double.

Back on the bus and a longish drive to the Ihlara Gorge, into which we descended and walked along the river for about three kilometres. We entered one small rock-cut church but many others lined the rock walls of the gorge. There were some beautiful picnic spots with shady trees and stretches of grass on either side of the narrow river.

We stopped at a restaurant near the village of Belisirma for lunch. Our group wasn’t very talkative and everyone tended to look in every direction except at each other for a while, but eventually I managed to get some conversation and a few laughs happening. The bus picked us up after lunch and we next drove to a twelfth century caravanserai by the side of the road, where caravans used to stop along the old Silk Route to China. It was still a big, solid, imposing structure, and it was easy to imagine the tall arched hall inside filled with campfires, merchants and complaining camels.

Back in the bus – too quickly for my liking but we did see a lot in one day – and a drive to Selime Monastery, an incredibly impressive complex of chambers and churches cut out of a rock promontory in the desert, that reminded me a lot of the caves at Ellora in India. We scrambled through corridors and rooms high up above the valley floor.

Our next stop was the inevitable pottery factory, to watch someone throw a pot the way they used to (but don’t any more) and be shepherded through rooms of ceramics (“dollars, lires, pounds, visa, mastercard; we can ship to your country”).

Last stop was the Valley of the Fairy Chimneys, to see weird mushroom-like rock formations in the light of the late afternoon sun and evade the rows and rows of souvenir stalls clustered around them. Some more rock-cut rooms to scramble through.

We were back at Goreme in the early evening. I washed up a bit at the pension, got my bag, had some dinner and got on the bus. 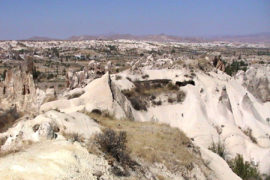