At 8am on the hotel terrace I enjoyed a good breakfast of cereal with raisins and dried apricot, a boiled egg and brown bread with tomato, cucumber and salami, washed down with orange juice and coffee; in front of me the Blue Mosque resplendent in the morning sun. I met S & P and we walked down to the Hippodrome and north past the Aya Sofya – I hadn’t known ‘Hagia Sofia’, as I knew it, was in fact the Greek translation – and through the quiet Gulhane Park to the entrance to Topkapi Palace. After briefly queuing we bought our entrance and Treasury tickets and walked through the Ortakapi or Middle Gate, into the Second Court. Here, as throughout the Palace grounds, were manicured lawns, pathways, gnarled trees casting pools of dappled shade, and an atmosphere of elegance and relaxation. Far from being the excessively opulent showpiece of Ottoman power that I expected, Topkapi Palace gave the impression of being a cultured and comfortable complex where, from a modern perspective anyway, it would have been very pleasant to live and work.

We made straight for the Harem tour queue, where after a short wait we bought tickets, joined a group and were ushered by a guide into the cool chambers. As often happens, the reality of the place was different from my imagination. I had always thought of the Harem as being a labyrinth of tiny chambers and narrow corridors, but the richly tiled and marbled chambers felt quite comfortable, though in some places a bit claustrophobic.

The private apartments known as the Harem, most of which were constructed by Suleyman the Magnificent (1520-66), consist of 300-odd rooms (apparently the number varies depending on your definition of ‘room’). We saw small, bare spaces softly lit by deeply recessed glass bulbs in the ceiling; huge ornately decorated chambers crowned by painted domes; the sultan’s bathing suite complete with gilt taps and privy chamber (hole-in-the floor style); narrow courtyards; audience rooms with flat, deep sofas against the walls; impresssive bronze fireplaces with pyramidal flues; and everywhere thousands of ornate tiles and beautiful decorative Arabic calligraphy.

We emerged in the Third Court, and strolled around this, the Fourth Court and the palace kitchens (now filled with cases displaying porcelain). Several rooms of holy relics echoed with the voice of an imam sitting in a glass booth in a corner chanting passages from the Quran into a microphone. Here we saw objects on display such as Muhammed’s sword, bow, hairs from his beard, dust from his tomb and the staff of the prophet Moses. The Imperial Treasury featured the 86 carat Kasikcinin Elmasi, the world’s fifth largest diamond, and the famous Topkapi Dagger. The Treasury sparkled with the colours of hundreds of emeralds, rubies, diamonds, pearls and sheets and sheets of gold.

Around lunchtime we ate at outside tables in the palace’s restaurant (‘Konyali’), with a spectacular view of the opposite shore and before us the blue waters of the Golden Horn. A perfect day of blue sky and warm sun with a cool breeze. 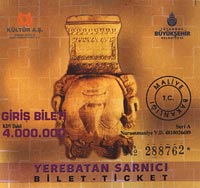 Finally we’d seen our fill of the Palace and walked back towards the Hippodrome and to the Sunken Cistern, an underground Byzantine reservoir built by Emperor Justinian in AD 532. It was a fairytale place, a huge forest of rough columns in a shallow lake of clear water in which fish swam, criss-crossed with walkways and with water dripping from the ceiling and coloured lights illuminating the mighty silouettes of the columns. Classical music added to the surreal atmosphere. Constructed using stone from ruins even more ancient, the columns and plinths were a child’s building-block set of mismatched stonework, giving the cavernous chamber a forlorn air filled with memories of long-forgotten past glories. Two columns were supported by great stone Medusa heads, one inverted, one on its side, exposed to the air and light again after a millenia and a half in watery darkness.

We were reluctant to leave the place but it had been a long day so we went back to our hotel rooms for a break. I went up to the terrace for a beer, to enjoy the view and read Turkish Letters by Ogier de Busbecq, a sixteenth century ambassador from Hapsburg to the Ottoman court.

In the cool evening we walked down to the shore of the Sea of Marmara and to a seafood restaurant on the waterfront, to eat eggplant, sea bass, salad and chips with a bottle of white wine. On the way back we were surprised to come upon a large commercial vessel that had been thrown up against the shore, presumably in a storm, and left to rust like the Statue of Liberty in the last scene of Planet of the Apes; a foretaste perhaps of how port shorelines would look after an apocalypse. A last strange and surreal sight as a full stop to the wonders of the day. 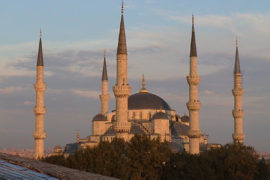 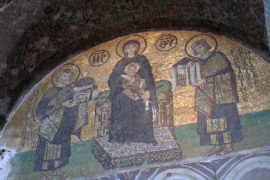