Lying on top of the crisp white sheets of my room at the Hotel Turkoman, Sultanhamet, Istanbul, Turkey, on a late summer evening, cool and windy outside, a bit muggy inside, distant music and voices that have travelled on the wind like the night birds gliding about the minarets of the Blue Mosque tonight; at the edge of Asia, in the middle of history and a modern city.

I awoke at 4am, dressed and tip-toed out into the cool darkness of a London morning. The mini-cab was on time to take me to the airport, but a twenty-four hour pilot’s strike brought the smooth running of my departure to a jarring halt. To the credit of the harried staff of Sabena Airlines however, after queuing for an hour I did get an alternative ticket on Turkish Airlines for 11.45am. I ate a full breakfast compliments of Sabena and strolled to Terminal Three, to begin several hours of waiting: the check in, the aimless browse through the magazine racks, the coffees you don’t really want but drink just to pass the time – airport life.

For no explicable reason other than cultural ignorance I found myself surprised that the Turkish Airlines flight was comfortable and easy. I talked for most of the three-and-a-half hour flight with K, a Turkish man who works in the IT department of a bank and who was returning home after five weeks working in London. He was friendly and kind, and gave me a quick course in the Turkish pronunciation of a few essential words, his perspective on Istanbul and his country, the troubles in Cyprus, and how to drink raki. When he saw the book I was reading (A Fez of the Heart by Jeremy Seal, the cover of which features a nineteenth century photo of a Turkish porter piled high with trunks and wearing a fez, he took great pains to explain how Turkey was “nothing like that anymore”. We parted at Istanbul airport with smiles and a patting of shoulders.

After waiting at the very modern and clean airport for half an hour, a young guy from the Hotel Turkoman arrived to drive me into the city. We drove along the shore of the Sea of Marmara, past parks and seafood restaurants and wharves, the streets slick with recent rain and a dark sky cut by an occasional jagged white slash of lightning. I had just missed a hailstorm. My driver pointed past the needle-thin minarets of the distant city to say “Asya”, then close to us, “Avrupa”. There was Asia and here was Europe.

Navigating what seemed the wrong way up narrow one way streets we soon came to the hotel, and there, standing on the street, were my good friends S and P. We met with hugs and excitement, and I felt almost a year drop away, as though we had only parted yesterday.

I checked into a small but comfortable room and – talking non-stop – the three of us headed out into the night to find dinner. We walked through the nearby Hippodrome, a long park where in Roman times chariots raced around the central obelisks. The floodlit minarets of the Blue Mosque pierced the night sky. A short walk around the mosque brought us to a restaurant called the Rami and a terrace table, where we had a delicious meal of chicken shish kebab and kagit kebap – lamb and vegetables cooked in a paper pouch. We talked and talked, I went on and on about my travels, and I realised how much I’d missed their company and intelligent conversation.

They’d been travelling for thirty hours, however, and it was still early when we walked back to our hotels, which are next door to each other. I walked back around the corner to buy some water, then stood on the rooftop terrace of my hotel to gaze at the golden magnificence of the Blue Mosque, sharp against the sky, looking like a huge pin cushion surrounded by giant vertical knitting needles. 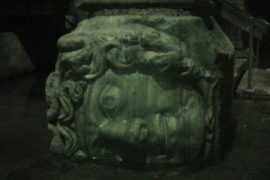