Another good breakfast upstairs here at the hotel – I had a delicious beef pho (beef and noodle soup with chilli and lime). Then we once again headed out into the packed streets of the Old Quarter, walking east to Hoan Kiem Lake. Streets around the lake were closed to traffic and people were strolling about. We walked along the shore and crossed a scarlet wooden bridge to a little island on which sits Ngoc Son temple – currently closed for renovations, we discovered after paying the entry fee! Heading north along the lakeshore, we stopped and sat on a bench, and were approached by several teachers and 4 young students, 8 or 9 years of age, who wanted to practice their English on us. They were very cute and their English was very good – well, each of us got one very good and confident English speaker and one not-so-confident one, the latter urged on by their teachers to ask more questions. We were told about ‘Teacher’s Day’, a day of appreciation for teachers throughout Vietnam that is coming up on the 20th, and asked lots of questions about our lives.

After a few photos they left, and we found a nearby cafe (Cafe Dinh) that was recommended to us as being particularly good for ca phe trung, a coffee, egg yolk and condensed milk drink. It turned out to be a very cool, grotty little upstairs place with a lot of character, accessed through a narrow alley, full of students smoking and looking at their phones. The small cups of super-creamy egg-nog-like coffee were delicious.

Heading back into the narrow streets of the Old Quarter north of the lake, we passed sleazy-looking bars, tour-booking agencies, wandering tourists, countless scooters and cyclos (the tacky bicycle-driven ‘taxis’ I wouldn’t be caught dead in), all accompanied by the constant beeping of horns.

Eventually we found Heritage House, an old shopkeeper’s house built at the end of the 19th century and preserved for its traditional architecture. It’s remarkable, and also sad, that this is such a rare remaining example of how the old quarter used to be. The small rooms and courtyards were a calming relief from the tacky chaos out in the street. But I suppose then, just as now, places were always built with making a buck foremost in mind.

Onwards, and a longish walk to the National Museum of Vietnamese History, through a somewhat lifeless area of up-market international brand shopfronts. Unfortunately, when we finally got there it had just closed for lunch, so we sat in a back courtyard and I realised I’d managed to get big blisters on both of my heels from walking in my new sandals. Good work!

We found a nearby place called Moto-san Uber Noodle for lunch – just 8 stools on the sidewalk facing a hole-in-the-wall, where a woman took orders that later descended from an upper floor via a dumb waiter.

Then back to the museum, though by this time my feet were killing me, and coupled with a bit of jet lag, I wasn’t really in the right frame of mind to appreciate the slightly dusty collection of early pottery, funerary urns, sculpture and other bits and bobs.

After an hour or so we took a taxi driven by a slightly grumpy man back to the hotel. Carol booked a night in a place in Sapa and our trek-plus-homestay with the company Sapa Sisters. Hope my feet are OK by then! Then, after a rest, we headed back to the rooftop bar for our already-traditional drink and planning session. After a couple of drinks we walked a few blocks through the insanely busy night streets to a local bia hoi joint called Bia Hoi Ha Noi, a very cool little street corner place selling refreshing fresh draught beer. I had two, and really enjoyed feeling like I was actually part of the local street scene rather than a tourist. Just 2 bucks for beers and nuts.

We were going to have dinner at a nearby restaurant but it was booked out, and since I wasn’t able to walk too far afield we went back to our hotel’s restaurant and had a great meal there.

In bed just past 8pm, though it felt much later as we were both exhausted. I’ve got very sore feet, but I’m looking forward to our cruise, starting tomorrow.

Have I mentioned how amazingly friendly and helpful the staff at this hotel are? The young women there – Lan, Fiona, Lizzie, Anna – make us feel like they’ve been personally assigned to take care of us, they’re so wonderful. And funny too – we’ve been lingering at the reception desk for conversations and laughs every time we return to the hotel. 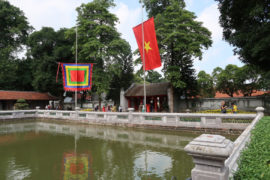 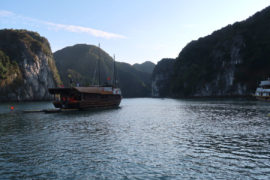