We began the day with breakfast in the hotel, which featured an extravagant buffet and menu – we made do with the buffet this time. Then we talked with Lan, one of the incredibly friendly people here at the hotel, about trips to Ha Long Bay. We had one 5 star cruise in mind but we ended up going for a different one on her advice, and also changed the length of our trip to 2 nights. A very luxurious boat, and it goes to a less visited and less touristy area, Lan Ha Bay, which was only opened up to tourists a couple of years ago. Despite all that it was still a very reasonable price.

That organised, we headed out into the very humid and chaotic city towards the Temple of Literature, a complex dedicated to Confucius founded in 1070. The streets were incredibly crowded and busy, swarming with people and beeping scooters and motorbikes. We were quickly covered in a sheen of sweat. At each road crossing we further perfected the knack of walking steadily and fearlessly into the stream of traffic and letting it flow around us.

The Temple was a welcome oasis. It is a series of greens and courtyards divided by gates, with a large square pond flanked by roofed enclosures. These protect large stone stelae, sitting on turtle statues, that record the achievements of long-dead scholars. At the end a pavilion housed a temple to Confucius. Children and tourists rubbed two bronze flamingo statues, presumably for luck.

It was very hot and humid and we were both still adjusting to the time zone, so this was a good slow start to our sightseeing.

From there we walked to the Imperial Citadel of Thăng Long, an historical site going back 1000 years. Before entering we had a good long lunch in a busy outdoor cafe out the front. The site was huge, and featured a large gate, remnants of the citadel uncovered by archaeological digs, various galleries and displays including an ancient pottery exhibit, and old 60s command bunkers (the North Vietnamese military command had its HQ here from 1954 to 1975) – an eclectic grab-bag of stuff. There was hardly anyone around.

We were both pretty exhausted by this point, so we headed back to the hotel for a rest, then decided to go back up to the nearby rooftop bar for a couple of pre-dinner drinks.

After showering and changing for dinner, we walked to a nearby restaurant called Madame Hien. We sat in the leafy courtyard out the front of a restored 19th century villa and enjoyed delicious Vietnamese food and friendly service. A perfect end to a very full first day. As always, it’s amazing how much you can pack into a day when you’re travelling. 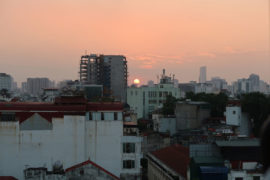 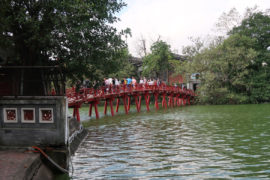