Up at 4.30am, and at 5am we were in a hotel car clutching breakfast bags provided by the hotel and on our way to My Son (pronounced ‘Mee-Son’). We were there just after 6am, and had time to eat our breakfast (eggs, toast, and fruit) before the ticket office opened at 6.30. There was only one other small tour group there, which headed off before us and we only met again briefly at one of the ruins—otherwise we had the entire site to ourselves, which was wonderful. The weather was damp and misty and the jungle a rich green—perfect jungle ruin viewing conditions!

These Hindi temples dedicated to Shiva were built between the 4th and the 14th centuries by the kings of Champa. The site—the initial area is reached by a short ride in an open electric tram/bus—is broken up into several groups of ruined buildings, starting with a small ruined tower and working up to an incredible sanctuary of several ornate and impressive ruined buildings, very evocative of the ancient Hindu temples I saw in Khajuraho, India. Tragically, much of the site was destroyed by American bombing in the war, and water-filled bomb craters still dot the area. But it was still a magical place, and we were so lucky to be able to have it all to ourselves and in such atmospheric conditions. Just as the time came to leave, the skies finally opened up and it began raining heavily.

Back to the hotel and a ‘second breakfast’ in true Hobbit fashion. Later we headed out and did some shopping—I bought a leather satchel, putting on my hard ‘I don’t really want this at all’ face and bargaining down to a far more reasonable price, ignoring every other higher offer. As much as it goes against my grain, it seems the trick is actually not to be nice after all!

We bought some scarves as presents, and had lunch in a cafe restaurant on a busy, noisy intersection. It was raining a bit so we bought thin plastic ponchos.

Back at the hotel we relaxed for a while as the rain picked up, and I went for a swim in the pool. At 5pm we had another relaxing massage each, then a margarita at the restaurant. We started having dinner there, but a loud toddler forced us to pick up sticks and have our meal in our room, which ended up being much more relaxing anyway. Inspired by the temples, we started planning next year’s trip to Cambodia and Laos! 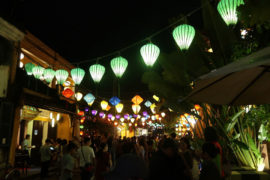 Hoi An: Solo Cycling, An Bang Beach
Hoi An: Breakfasts and dinners 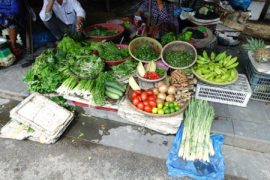